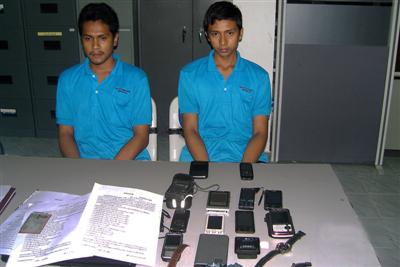 PHUKET: Two baggage staff at Phuket Airport are to be charged with theft after allegedly stealing two cellphones from an Australian tourist’s luggage yesterday.

When Bret Drinkwater arrived at Suvarnabhumi Airport in Bangkok aboard a Thai Airways flight, he noticed his iPhone and Nokia cellphone were missing from his bag.

After he informed police in Bangkok, at around 4pm, they contacted colleagues in Phuket.

Officers at Phuket International Airport checked the duty roster and found that 18-year-old Halem Kha-mi-duay from Songkhla and 24-year-old Santi Toela-wee from Nakhon Sri Thammarat had been responsible for loading baggage onto Mr Drinkwater’s flight.

The two men, employed by a sub-contractor of Thai Airways, confessed that the phones had been taken from the Australian’s bag by Mr Halem , police said.

Mr Halem reportedly gave one of the phones to Mr Santi, who took it home.

Police searched the two men’s houses, finding the iPhone in the pocket of a pair of jeans at Mr Halem’s house and the Nokia on Mr Santi’s bed.

Police also found a number of other items including a hard disk, a pair of brand-name sunglasses, watches and other cellphones at Mr Santi’s house which they suspect were also stolen.

The two men are being held in Thachatchai Police Station.