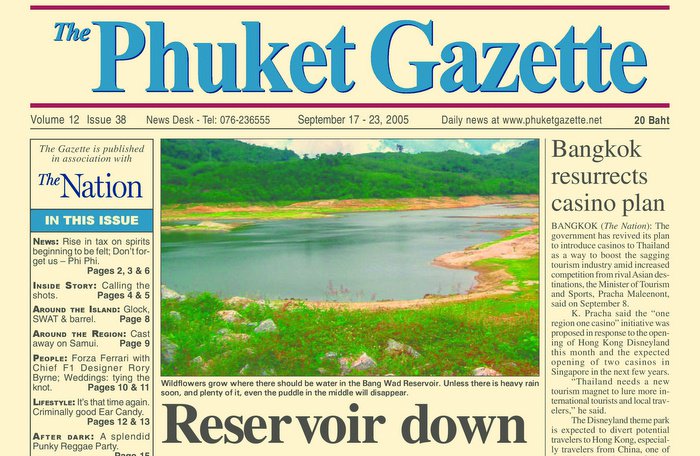 PHUKET: Water woes – how many times has the Gazette used that headline in the last ten years? Well, it soaked through page one again as Phuket’s sole public reservoir in 2005 was ‘down to [its] last few drops’.

Not too long ago, when those of us currently on the island were knee deep in flood waters, we found out that the Royal Rainmaking Project was called upon to help seed clouds and bring some much needed water down to the island in 2005. However, the seeding had very little effect.

In turn, one clever man began looking into importing camels, which led to an entire street of camel dealers somewhere in Patong – somehow, only their toes remain.

As if personal hydration hiccups on the horizon weren’t enough to sink islanders’ spirits, the effects of a hike in hard alcohol taxes were starting to be reflected on store shelves.

The increase, which ostensibly had a twofold goal of cutting down on alcohol consumption and boosting government revenue, applied to all distilled alcohol.

If the measure did in fact cut alcohol consumption in Phuket, it is hard to imagine what a tangled, deadly mess of drunk drivers we’d find ourselves in now, ten years later.

Though the Gazette no longer reports every drunk driving fatality on the island, as it once seemed to do, the problem itself remains grave.

Those who have not yet been jaded by numerous failures to rein in drunk driving on Phuket can at least hope that the 39 Lion Alcolmeter SD-400 breathalyzers donated last month will help officers get some drunk drivers off the road.

And speaking of inescapable booze conundrums, Phi Phi – the hedonistic party island of the Andaman – cried out ‘Don’t forget us’ as the Ao Nang Local Administration Organization (OrBorTor) pleaded for more government help for tsunami relief.

Phankam Kitithorakul, chairman of the Ao Nang OrBorTor, attempted to dispel the idea that Phi Phi had yet to fully recover from the tsunami, while in the same breath conceding that the cabinet had already taken much-needed steps to help rebuild local infrastructure: electricity, fresh water and footpaths.

Unfortunately, the development, foot traffic and apparent lack of interest in preserving the stunning national marine park has taken a serious toll on the island, with speedboats regularly anchoring in fragile coral reefs.

If investigators do indeed prove that millions of baht has been skimmed off the top of national park fees over the last three years, we can only hope that Phi Phi officials – not the beautiful archipelago itself – are forced to pay the price.