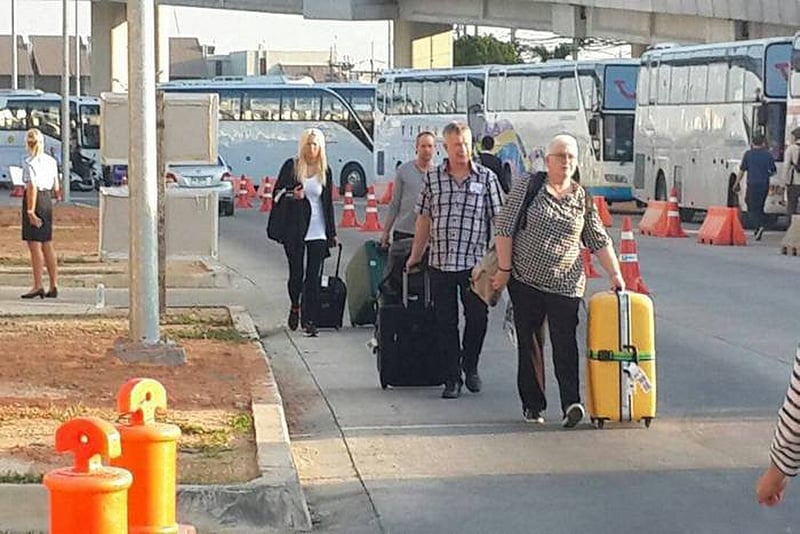 The Transport Commission of the National Assembly of Thailand (NAT) visited Phuket International Airport to follow up on the current renovation and services at the terminal following numerous complaints from passengers, tour companies, media and other government departments.

The team from the Transport Commission were welcomed by the Director of Phuket International Airport, Petch Chancharoen, who took them on a tour to observe the renovations, customer service, check-in counters, immigration service and the sitting areas of both the domestic and international terminals, before a meeting to discuss about the problems and management development of the airport.

The Director of Phuket International Airport said that the problems and obstacles of the airport recently include the lack of facilities, the problems with lighting, electricity systems and urgent runway surface fixing. There have been a rapid increasing number of passengers and there are a lot of complaints as seen in Social Media channels.

“We acknowledged all the complaints as we share these problems with you. For the runway fixing, which affected many flights, we really had to do it urgently to prevent any major incident.”

“The whole renovation hasn’t yet finished but when it finishes, the airport will have a capacity of 12.5 million passengers while the number of tourist in Phuket last year already exceeded 16.5 million people. The demand already exceeds the management and capacity limits but we are trying our best.”

Meanwhile, the Deputy Chairperson of the Transport Commission, Adm Boonyarit Kerdsuk, said that Phuket International Airport must develop better services for both arrival and departure such as immigration, customs and police.

“Also, the safety standard according to ICAO (International Civil Aviation Organisation) still needs to be improved as Phuket airport has limitations in terms of geography. The seating area of the terminals are not nearly enough. About 60% of the area has been set aside for shops and some of them even hide the beautiful landscape of the runway and the sea. The topic needs to be discussed with the whole commission as we do not want Phuket airport to become another mall. There should be spaces for passengers to wait for their flights. There should be at least 70% for passengers and 30% for the shops,” he said.

“There should be more and better air-conditioning as well. Some spots in the domestic terminal are very hot because of the unfinished renovation. I believe, the runway/taxiway maintenance will also affect the flights again so the airport must be prepared for this and inform the airlines in advance to decrease any negative effects next time. Though the airport is still under renovation, there should be more announcements especially during April as the number of passenger will increase even more.”

“We will bring the report from this visit to discuss with government officials and individual sectors from the four Andaman provinces.”