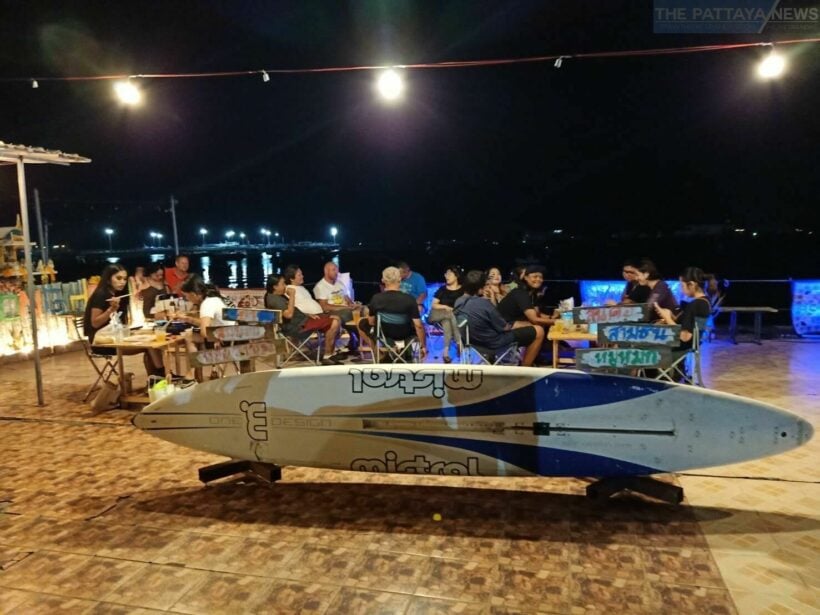 One of the 'restaurants' raided last night, photo by The Pattaya News.

Just one day before Thailand’s official alcohol curfew goes from 11pm to midnight, Pattaya police raided two ‘restaurants’ last night at around 11:30pm for allegedly serving alcohol past 11pm. The restaurants were on Walking Street, located at the south end of Pattaya beach. Pattaya police yesterday started enforcing a closure of Walking Street from vehicle traffic as the area was becoming a bit busier.

A Pattaya police officer reportedly happened to be passing by the ‘restaurant’ on Walking Street, when he noticed what looked to be “rule breaking” over the current official closing time of 11pm. A team from Pattaya City Police then raided the open-air “restaurant”, which was reportedly a group of cocktail carts. They found customers drinking past the legal curfew time.

Police then raided a ‘restaurant’ on Sukhumvit Road, called Roong Beer Jomtien. The officers told the staff they could hear music and partying inside, and the staff then claimed they couldn’t open the door to the VIP room because they didn’t have the key.

Police then took the managers of both restaurants to Pattaya City Police Station for further investigation and possible prosecution.

Some bar management have been “pushing” the enforced limits past 11pm knowing that the change over of shifts happens for the Pattaya police at 11pm. Other ‘restaurants’ in the town have been operating well past the published closing times for more than a month.

Pattaya bar and business owners have had to face a much stricter enforcement of closing times and restrictions when compared to Phuket, for example, where there’s been open flouting of many restrictions and rules for months.

Skip
10 hours ago, Pinetree said: Quite right too. Tomorrow doesn't mean yesterday. People on here moan about the BiB not doing their job and when they do uphold the law, they moan about that too. No pleasing some people it…

Bluesofa
15 minutes ago, Skip said: I see no shades of grey in your life... right or wrong no matter how draconian... haha As someone from London said decades ago: Crime isn't black & white, but various shades of Kray.
HiuMak
Last chance to earn some brownie dollars
HolyCowCm
They so strong and tough. So good we all protected from the bad law breaking criminals. I feel much safer for my family especially my kids who have been home the entire night in their rooms

Pinetree
4 hours ago, Skip said: I see no shades of grey in your life... right or wrong no matter how draconian... haha yep, that's me in a nut shell. Grey is the most boring colour ever.