The Tourist Police headed by “Big Joke” Surachet Hakpal have made their strongest statement yet about their intention to clear out illegals and over-stayers.

Many of their targets are referred to as “dark skinned”.

The Tourist Police Bureau have produced a five minute video outlining their prior actions and future courses of action.

The video features Surachet – the deputy commissioner of the tourist police – as the front man. The crime buster known as Big Joke (rice gruel) in the Thai media is fronting a crime suppression drive with a remit far in excess of what is often understood by the role of the tourist police.

He has been especially responsible for arrests of call center gangs. The tourist police bureau are known to be working with other police groups such as special branch 191 in this regard.

The video starts with his interactions with some suspects with the help of an interpreter as other high ranking police look on. The mood appears almost jovial at times but the intimation of the video is that the threat is real. 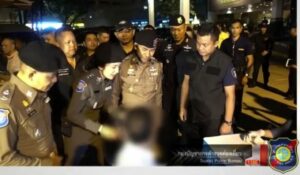 Later Surachet is speaking in front of a banner that refers to “111 targets, 118 arrests” and states that “foreigners have behavior that is affecting the stability of the country” that “starts with illegal entry and illegal stay in the Kingdom”.

Surachet talks about his crackdown and refers to “dark skinned” people as prime targets. He says many are masquerading as international school teachers and footballers to commit crime. He outlines what action has been taken and will continue to be taken in places such as Bangkok, Hat Yai, Chiang Mai, Khon Kaen, Korat and Phuket.

The video centered around the commissioner’s announcements made in Bangkok after raids last Friday that were previously reported on Thaivisa and other media.

More than 100 arrests were made with most of the suspects coming from Africa and India.