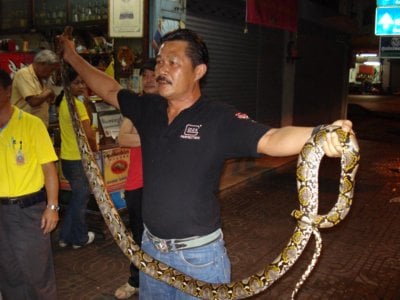 YALA: Being a teacher in the Deep South during these troubled times takes a certain amount of bravery and acceptance of personal danger. It was perhaps these qualities that helped one teacher from Yala Province keep his head while all those about him were losing theirs when faced with a very real threat.

The threat, however, was not a rifle-toting youth, but an angry 10-foot python that appeared in a Bangkok restaurant during a rainstorm.

At 9:30 pm on September 11, Preechai Lochai, a teacher at a school in Yala’s Bannang Sata District, was enjoying a morning bowl of khao tom (rice soup) on Samsen Rd in central Bangkok. K. Preechai, together with two fellow teachers from other provinces, sat calmly watching the pouring rain and rising floodwaters on the city streets.

Suddenly, all hell broke loose in the kitchen. The cook, who was just about to fry some phak bung fai daeng (spicy aquatic morning glory) screamed. Throwing down his spatula, he ran from the kitchen screaming to the owner that a huge snake had just popped its head out of a hole.

In a panic, the owner and wait staff dropped what they were doing and ran after the cook until they were a safe distance away. K. Preechai’s friends looked on in shock as they saw the cause of the commotion.

It was a thick-set python approximately three meters long – and it was slithering straight towards their table.

The snake made a course for K. Preechai. Before the teacher could take evasive action, the serpent wrapped itself around his leg with all the constricting power that pythons are famous for.

Rather than descending into hysterics as the staff had done, presumably due to his dealings with some tricky customers in his day job, K. Preechai bellowed out, “Southerners aren’t afraid of snakes,” before launching into battle with the legless reptile.

K. Preechai used all his energy trying to unravel the beast from his leg, but found it rather hard to balance with a 10-foot reptile around one of his limbs. The man and the snake ended up rolling round the restaurant in a closely-fought dual that sent chairs and tables flying in all directions.

Neither man nor beast was able to get the upper hand until a passer by, Narongthat Patharathitikul, waded in to the aid of K. Preechai and grabbed the snake’s head. With the fight now two on one, the snake soon begin to tire and lose stomach for the battle.

The combined force of K. Preechai and K. Narongthat was enough to untangle the snake from K. Preechai’s leg and stuff it into a fertilizer sack that a helpful spectator had provided.

The police and animal services were then called in to take the snake away and release it back into the wild where it wouldn’t be able to cause any more mischief.