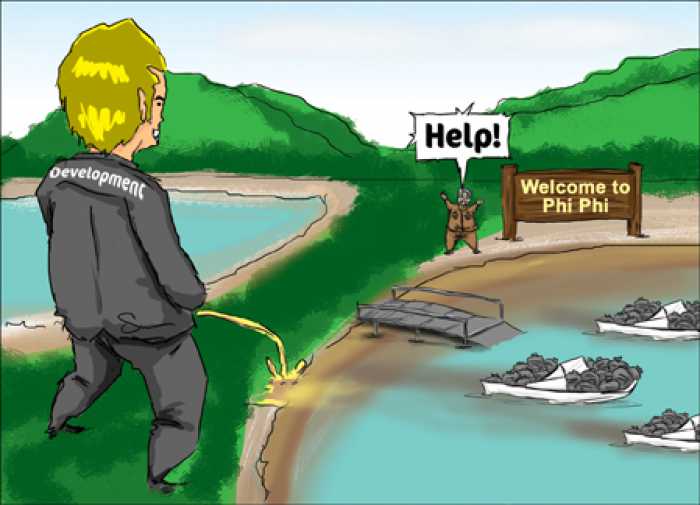 PHUKET: Efforts by the National Council for Peace and Order (NCPO) to clean up corruption in Phuket have had some dramatic results, steering the island toward sustainability – at least for the time being.

Unfortunately, some smaller destinations, including the Phi Phi Island chain, continue to suffer from unregulated development and mass tourism on a scale that has led to what can only be described as an environmental crisis (Special Report here).

For many first-time visitors to Phi Phi Don, the most striking revelation might be how over-developed Ton Sai, the gateway to the island, has become – a stark contrast to what one would expect after looking at travel brochures.

When it comes to destinations, tourists are shoppers, and branding still plays a key role in the process.

To many Western ears, the name Phi Phi sounds exotic, like Fiji, Tahiti, Tonga or Bali.

Of course, native English speakers are quick to realize that Phi Phi also sounds strikingly like the phrasal verb “pee pee” in English; meaning: to urinate.

This association is not limited to native speakers. “I need to go to Phi Phi Island” is a phrase commonly used by polite Thai girls to indicate they need to go to the bathroom, even in places as far-flung as Pattaya and Chiang Mai.

Potential tourists who make the computer click to check out promotional images of Phi Phi’s stunning limestone cliffs no doubt find them very compelling. Thus, the random word association is dismissed as a quirk – or even considered somewhat charming.

But charm quickly turns to repulsion when they disembark and see brown water staining Tonsai Bay.

It is sad indeed that Phi Phi’s unregulated post-tsunami development has been fuelled by such greed and ignorance.

Despite all of the devastation wrought by the region’s worst natural disaster, the tsunami did literally wash the sands of Phi Phi clean and provide a chance to begin anew.

With its Designated Areas for Sustainable Tourism Administration (Dasta), Thailand is the only country in Asean to have an agency dedicated to supporting environmental development and conservation for sustainable tourism. Established just a year before the tsunami, the agency was keen to get involved in the re-development of the island.

Sadly, the powers-that-be on Phi Phi at the time had no desire to work with them, opting instead to re-develop under the same mindset that had turned the island’s main commercial strip into a dump in the first place.

However, both local residents and tourists are keen to see the NCPO step in to help restore the island’s natural beauty.

A Phuket Fable: The bowed tree and the bow saw