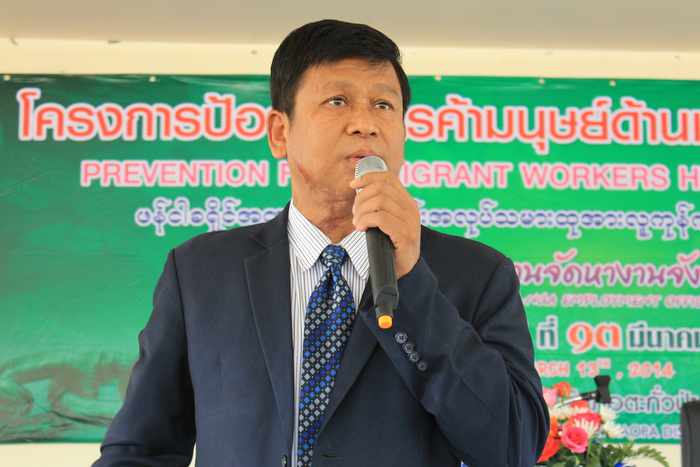 Htoo Chit, 49, from Kayah, Myanmar, is the executive director and founder of the Foundation for Education and Development (FED), based in Phang Nga. FED is an NGO that works to promote and protect the rights of migrant Burmese workers. Htoo was recognized as an Ashoka Fellow in 2008 for his work to empower a new generation of migrants by offering them a range of opportunities long denied by existing institutions.

Here, he talks about the current state of affairs for Burmese migrant workers in Thailand, how they are continuously denied basic rights and what must be done by his organization and other agencies to initiate change.

PHUKET: A combination of many horrific factors – political repression, civil war, the 2004 Boxing Day tsunami, Cyclone Nargis in 2008, land confiscations and more – has forced a mass exodus of Burmese and ethnic minority tribes from their native lands in search of economic opportunities abroad.

Myanmar workers find Thailand to be the best place to migrate for reasons such as food and cultural similarities, easily accessible borders, easy money transfer to families back home, common
religious beliefs and a thriving economy with numerous unskilled labor opportunities.

Workers in 3D jobs are often denied basic labor rights and abused physically and mentally by their employers. They are also denied minimum wages and compensation in cases of work-related injuries.

These basic human rights are abused daily, and many migrants are often too scared to seek help due to a lack of legal assistance and knowledge of the Thai legal system.

Long lasting and deeply rooted corruption and bribery among government officials, employers and human-trafficking brokers, has further impeded the progress of migrant workers in obtaining basic rights, and although the Myanmar government has improved its awareness and support of its people working abroad, greater effort and enforcement of policy is still needed to ensure that migrant workers receive the protection and basic human rights they deserve.

More of an effort by the Thai community and government is also needed to change the living and working conditions of Myanmar migrant workers.

Burmese and Thais often share a common workplace. Yet there are still social divisions between them that aggravate misconceptions and misunderstandings, which act as a source for violent confrontations and sexual assault among the communities.

For example, in some provinces, martial law is used to control the movement of Burmese migrants. In some areas, they are given a curfew and forbidden from doing everyday things, such as driving a motorbike.

We denounce such actions, and lobby relevant agencies, international governments and the Thai government.

Our staff members work very closely with several Burmese communities so we never lose sight of the issues that affect them on a day-to-day basis. Our staff members are predominately of Burmese origin and have come to Thailand through similar circumstances, which has enabled FED to reach the migrant population on a more personal and intimate level than a lot of bigger NGOs.

The result is a system in which Burmese migrants are empowered to lead better lives while in Thailand and are better prepared to make an impact in their home country should conditions improve to allow their return.

It is generally accepted that Myanmar’s political situation has begun to make positive strides in the right direction in recent years, as the long-standing military state begins to reopen to the world after decades of reclusiveness.

However, significant change takes time. There will be setbacks and obstacles to overcome.

Looking out for those who look out for our Phuket community