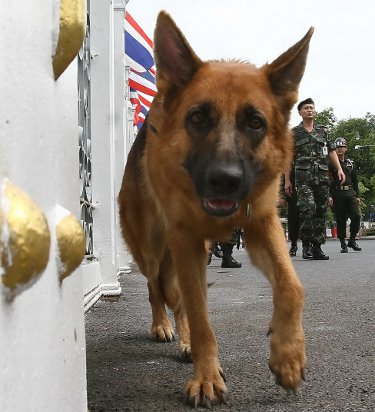 PHUKET: A police officer this week was able to sniff out thousands of poorly-concealed ya bah (methamphetamine) pills being smuggled onto the island in a car at the Tah Chat Chai police checkpoint. (See story, current issue of the Phuket Gazette. Digital subscribers click here to download the full newspaper.)

This raises the question of why detection dogs are not on permanent duty there.

As an island, Phuket enjoys a natural security advantage: all vehicles must cross a bridge to get on or off the island, creating a choke point where criminals can be prevented from entering or leaving by road.

Unfortunately, not enough has been done at the island’s northern tip over the years to maximize this advantage. As a result, the island is awash with ya bah and other illegal narcotics, as well as handguns and other contraband.

Although a considerable amount is intercepted at the checkpoint, it is just the tip of a very large iceberg.

If a human can sniff out 3,550 ya bah pills, how many could a well-trained drug-detection dog keep off the streets? The olfactory superiority of the canine over man is well documented.

Not only can dogs be trained to sniff out even trace amounts of narcotics, but they can also detect everything from explosives to bedbugs – another useful skill on an island with over 50,000 hotel rooms.

Training a dog to sniff out drugs and other substances is simple in theory, but not in practice.

For a start, less than 20% of dogs have the genetic predisposition for the work, which explains why the South Korean government once funded their program ‘Toppy’ (from ‘Tomorrow’s Puppy’) to supply cloned Golden Retrievers with exceptional abilities for its Customs Service.

Training difficulties are well-known to Muang District Chief Supachai Pochanukul, whose two pups were sent to the Phuket International Dog School but turned out to be not up to snuff. Fortunately two more dogs are now in training, hopefully to be deployed by the New Year.

As a resort island, Phuket doesn’t need scores of German Shepherds patrolling the streets like the scenes from WWII Europe. There are several other valid criticisms of their effectiveness in large crowd settings.

But given that the island has squandered millions on the now-discredited Alpha 6 “molecular resonance” detectors, isn’t it time to get detection dogs back at the island’s most important police checkpoint?

After all, they are happy to work for food and water – and there are lots of them out of work on Phuket’s streets these days.