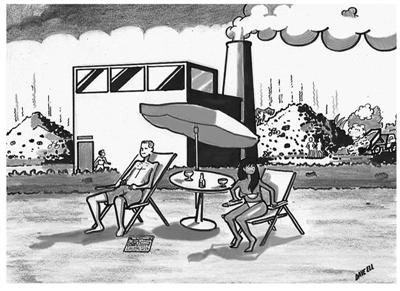 PHUKET: I expected some backlash for my support for a provincial plan to implement a charge for plastic bags, and it came the weekend before last in the form of a strongly-worded open letter to the Phuket Energy Office with the heading: ‘Crisis? What Crisis?’, after the 1975 Supertramp album by the same name.

The letter, by a Canadian who identified himself only as ‘DM Surin Beach’, described the plan alternatively as ‘moronic’, ‘a misguided crusade’, a ‘highly regressive tax on consumption’, ‘of dubious legal standing’, etc.

After a well-written, eight-point argument, he finishes: I…will be the first to boycott any store imposing such a moronic tax as the bag tax.

Attempts by the Gazette to reach the writer to get his real name and permission to run the full letter have met with no reply. Hopefully ‘DM ‘ will grant such permission soon, but in the meantime I would like to address the introduction to the letter, which states:

In support of the effort, Mr Stephen Fein of The Phuket Gazette describes a landfill ‘crisis’. Where does he get this idea from? What is the exact nature of this crisis? This is most certainly make-believe hysteria. There is no crisis. Plastic bags do not have a stench. They take up a tiny amount of space.

To this I encourage DM to take a trip down to Saphan Hin to see what is going on there.

As a journalist I try to take a measured approach when applying the word ‘crisis’ to any situation, whether it be the global economy or the environment – or even a darts match. But in my opinion, piling up mostly unsorted garbage at a rate of at least 300 tonnes a day adjacent to the island’s largest municipal park and at less than a meter above the high tide mark in a mangrove area does constitute a crisis.

I am sure the fish farmers who had their stocks wiped out by a toxic effluent plume in June 2007 would agree, as would long-suffering residents of the nearby Ban Saphan Hin. I am sure DB would agree too if all this waste were being piled up in Surin, not Saphan Hin.

It may be true that plastic bags comprise a small percentage of the waste stream by weight or volume, but their excessive use as ‘packaging’ for wet food waste, other organics and even toxic wastes like used batteries is causing a great deal more environmental harm than is necessary.

For the record, the Saphan Hin landfill is also routinely referred to as a ‘crisis’ by local Thai department heads and municipal officials, the same people who typically cheer-lead Phuket as ‘Pearl of the Andaman’.

If even they are calling it a crisis, you have to think it might actually be one.

OPINION: Phuket looking ahead to 2010