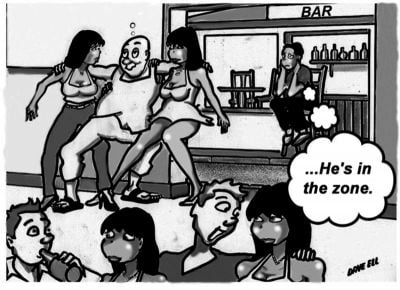 The front simply read: ‘Still alive and kicking,’ a nod to the industry’s resilience.

Given the drop-off in sales of the older shirt, perhaps it is time for the producers to update their message.

The only problem might be finding a shirt long enough to fit them all.

On a more serious note, the political polarity in the country does represent a grave threat to Phuket’s tourism industry, even if the island itself has remained free of discord.

While Phuket may offer very good value for money to tourists who realize how little threat there is to their safety, any benefit from this will be far outweighed by the effects of the images that were broadcast daily from Bangkok and other major TV news outlets around the world .

It seems every big threat to Thailand’s tourism industry is met with knee-jerk tourism promotion schemes, such as the Tourism Authority of Thailand (TAT) ‘road-shows’ abroad, and this latest threat is no different. Unfortunately, the TAT’s role is largely limited to that of cheerleader, with little power to actually influence events on the playing field.

More unfortunate is the fact that the one arm of the government with real power to change things – the Ministry of Interior (MoI) – has failed to address the many tourism-damaging regulations put in place during the Thaksin years under Interior Minister Purachai Piemsomboon.

All under the foreboding banner of ‘social engineering’, these measures include such impractical things as tourist-unfriendly closing times and zoning laws for entertainment venues.

Recently, however, the MoI has mooted the idea of expanding the zones in Phuket and some other provinces as a way of boosting tourism. [See the current issue of the Phuket Gazette. Digital subscribers click here.]

It is unlikely that this ‘initiative’ has anything to do with the current crisis, as the MoI bureaucracy works in ways that make it generally impossible to effect important change in the short term – and not at all when governments come and go in quick succession.

Nevertheless, the idea of adding to the number of entertainment zones in Phuket offers a small ray of hope at a time when the island’s tourism prospects are gloomy indeed.

But more importantly for now, at least, let’s hope the country can continue its steps back from the brink – before zoning regulations become the least of our worries.

PHUKET OPINION: Thanks, but more airport taxis not needed