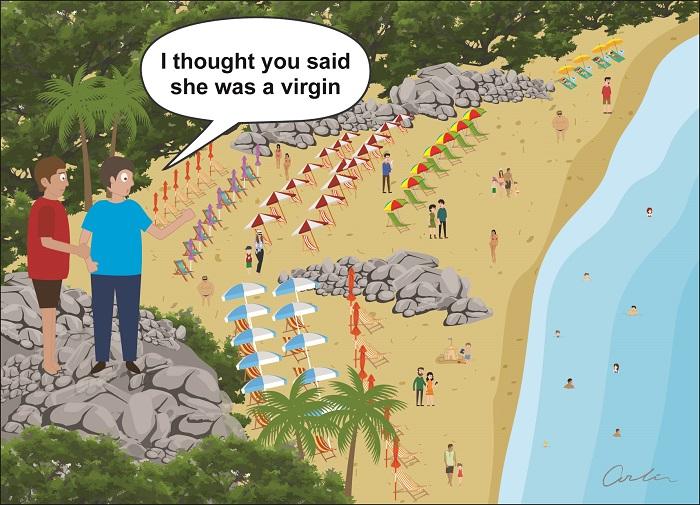 PHUKET: Recent photos sent to the Phuket Gazette by a concerned reader revealed that the popular Laem Sing Beach in Kamala has been encroached upon by ‘private investors’ who are renting out multiple rows of beach loungers and umbrellas on the ‘virgin beach’.

This illegal activity requires immediate action by provincial officials and law enforcement officers before the re-emerging lawlessness spreads to other beaches on the island and compromises all of the hard work the government has done to return our beautiful beaches to their rightful owners: the public.

When the National Council for Peace and Order (NCPO) took power in May of 2014, few expected that endemic corruption in the Phuket tourism industry would be a prime target of the new government.

Even as Thailand’s domestic political situation drew considerable criticism from international observers, the Gazette supported the NCPO in its unprecedented campaign to rid the island of corruption that continued its cancerous spread under successive governments, both ‘red’ and ‘yellow’, for decades.

Issues of democratic development aside, the fact remains that there will never be a better time than now to rid the island of corruption, land encroachment and other acts of lawlessness that have compromised Phuket’s beautiful natural environment.

The NCPO’s campaign initially focused on illegal taxi ranks and other overtly corrupt practices in the public transport sector that have done so much damage to the island’s reputation as a safe, reasonably-priced resort destination.

However, the NCPO’s most unexpected move to free Phuket of corruption came with the declaration that the long-standing practice by municipalities of divvying up local beaches for lucrative concession to beach service providers was illegal and would no longer be tolerated.

That being said, a suitable number of beach loungers and umbrellas should be made available for rent at popular beaches like Patong and Karon, especially as shade trees along these strands are few and far between and many tourists come here with the intent of spending much of the day on the sands. Beach umbrella rental operators also can play an important role in keeping our beaches clean and safe for visiting tourists.

However, the issue here is not whether or not beach chairs should be allowed at Laem Sing, as it has already been designated as a ‘virgin’ beach where no such concessions are allowed. The issue is a blatant disregard of the laws and rules governing our island to the international embarrassment of the government.

Lack of decisive action by police and local leaders could set a sad precedent that will undermine the considerable progress achieved by the NCPO in reclaiming our beaches for public use.

Justice, with transparent punishment to the perpetrators, needs to be served – in this case as soon as possible – to set an example for others who might be tempted to follow suit.

Ministry of Farang Affairs: Too many ice cubes