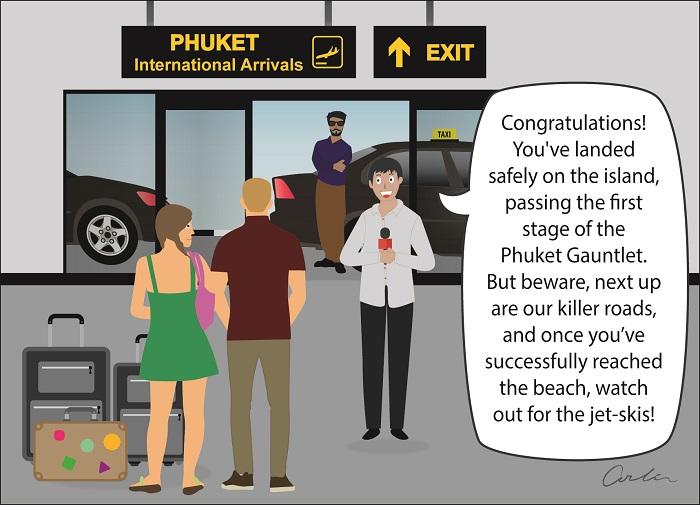 PHUKET: This year’s high season for tourism has brought with it a surge in needless mishaps, injuries and deaths as tourists flock to our shores in pursuit of holiday happiness.

Many of the victims, without a doubt, presume that sufficient measures are in place to ensure their safety. Rules and regulations do exist, but as our news pages chronicle – week in and week out – there is no substitute for law enforcement backed up by simple common sense – such as resisting the desire to kiss a python at a snake show.

Military strategists have traditionally broken down the dynamics of warfare to land, sea and air forces. Perhaps it would be enlightening to view tourist safety issues in Phuket from the same broad perspective.

As most foreign tourists to Phuket arrive by plane, let us start in the sky. A complete overhaul is underway, with the discredited Thai Department of Civil Aviation having been replaced by the Civil Aviation Authority of Thailand. With ever-increasing competition, we can only hope that the new body can improve commercial airline safety, not only on international routes, but also in the all-important domestic market, which feeds the lion’s share of visitors to Phuket.

The last thing Phuket needs is a repeat of a disaster like the crash of One-Two-GO Flight 269 that claimed the lives of 90 passengers at Phuket Airport in 2006.

On terra firma, Phuket’s roadways continue to be the leading and most consistent cause of tourist killings. Contributing factors include the lack of safe, reasonably-priced public transport, woefully inadequate law enforcement, and the prevailing ‘culture of carelessness’ among Thai motorists that seems to transmit itself like a contagion to so many foreign tourists after they touch ground here, immediately going into full ‘when in Rome’ mode.

Last, but not least, is the totally unacceptable number of marine accidents that have transpired in recent months.

Despite relatively calm seas this time of year, the fact remains that the high season is haymaking time for speedboat and jet-ski rental operators.

Sadly, the jet-ski industry continues to enjoy the open support of the agency responsible for its regulation, which is why we must endure the endless series of gruesome assault and accident reports.

Ministry of Farang Affairs: If no one sees, it didn’t happen