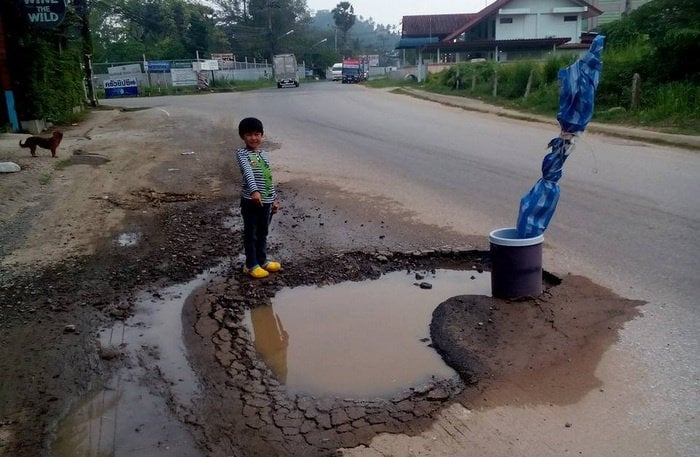 PHUKET: Year after year, the vehicle population of Phuket has been growing rapidly, expressing itself dramatically in the island’s ever-worsening traffic problems. After 12 years here, I would say that the traffic is now worse than ever.

It’s no wonder that the governor decided to spend money in order to reduce the congestion by building underpasses in certain areas.

However, the thing that concerns me the most is the condition of the roads near the construction sites.

There are not enough warning signs or lights to help drivers safely maneuver the road at night, causing many people to have accidents.

The Samkong intersection underpass that was originally slated for completion in March has seen delays, causing its opening to be pushed forward to the end of the year.

Delays in construction are acceptable, but along the road in that area you’ll face very extreme conditions, like tracking on the surface of the moon with an added accident for free.

During construction, particularly in the last 6 months, I have read accident reports from that area every day. Most often it involves a motorbike hitting a big pothole at night because of the inadequate lighting or lack of warning signs.

A local community on Facebook that now has more than 6,500 members stood up and held a small protest at the construction site recently and handed the governor a formal letter of complaint. However, even after we were told that the situation would be remedied, nothing has happened.

That is until last week when four local men were tired of waiting and bought their own asphalt and started patching up the road.

At first, they were only able to fix two holes, but after people saw their good deed on Facebook, many more joined them and now many areas of the road have been mended.

Granted, they are not professionals, but their work has already made the road so much safer – a whole lot better than the whole lot of nothing that the government had been able to achieve, despite its obligation to act in the best interests of the motoring public

It was only after the volunteers’ good deeds had spread through social media that the government jumped in and ordered the Highways Department to take care of the road.

I know that the government had the road dangers in their view and that these issues take time to fix, but why did we have to wait so long and let so many accidents occur before action was taken? And why did the community have to demonstrate what action needed to be taken for the problem to finally be solved?

As underpass construction continues at different areas on Phuket, I can only hope they will do a better job at maintaining the safety of the roads there.

Inconvenience is one thing, but personal injuries and loss of life are unacceptable.