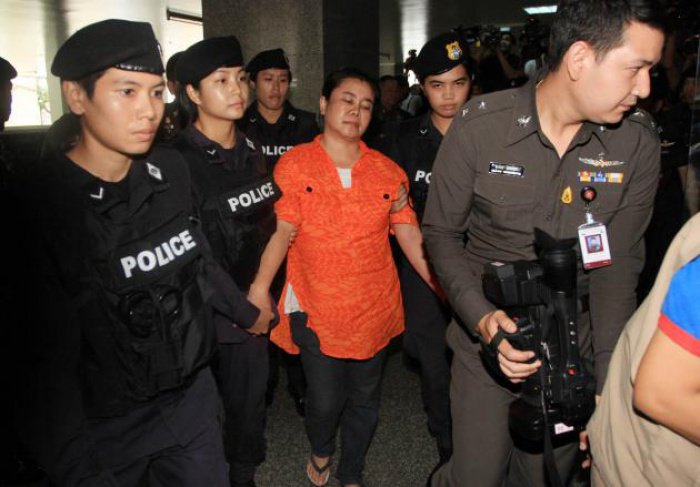 PHUKET: Police believe a suspect arrested for her alleged role in the March 7 hand-grenade attack on the Criminal Court is a key operative coordinating with a high-profile US-based suspect who has been financing an anti-government movement.

The two made contact through the chat application LINE and social media, and details were discussed with other operatives at a meeting in an area that comes under the jurisdiction of Chok Chai police, Pol Maj Gen Chaiyaphol Chatchaidej said.

National police chief Somyot Poompanmuang later confirmed Ms Suphaphorn’s confession, saying details on the roles of each of the 16 suspects, including Mr Manoon and Mr Wirasak, who are on the run, came from their own accounts.

He said Ms Suphaphorn was a core leader of a political movement, which as of now cannot be named, and that her name was on a watchlist of security agencies – but there was no clear information about her activities until her role surfaced as a main coordinator in the hand-grenade attack.

The four other locations marked as sites for the attacks, according to Gen Chaiyaphol, were Lumpini Park, an MRT station in Chatuchak, the 11th Infantry Regiment compound in northern Bangkok, and the Siam Kempinski Hotel car park.

A police source said later that Ms Suphaphorn and Natthathida “Waen” Meewangpla – who was apprehended on Monday – face additional charges of planning bomb attacks as well as the charges of terrorism and criminal conspiracy, which have been pressed against all 16 suspects.

Ms Natthathida, like Mr Manoon, also faces lese majeste charges, the source said, without providing details on exactly what she did that violated the law.

Police spokesman Prawut Thawornsiri said police were seeking to bring Mr Manoon back with Interpol’s help to face terrorism charges. This is the first time that Thailand is seeking extradition of someone on terrorism charges.

Asked whether the hand-grenade attack would be considered a political case, which could result in the United States turning down the extradition request, Gen Prawut said people with different political stances should seek solutions peacefully, not through violence or bomb attacks.

No figures on civilians being tried by military court