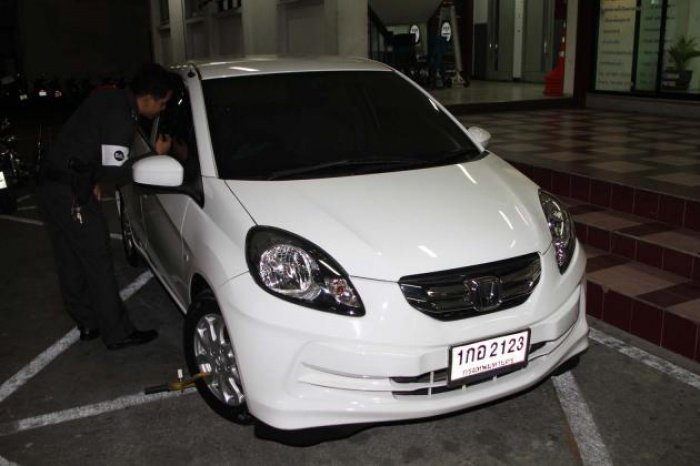 PHUKET: A female driver has become the first motorist in the country to be punished for refusing a breathalyser test, said the police, who added that they were forced to tow away her car with her still inside.

The Bangkok South Municipal Court found Chutima Kanthang, 28, guilty of drunk driving, but handed down a suspended three-month sentence with one year of probation.

She was also ordered to pay a Bt8,500 fine and perform community service at least twice.

Her driver’s licence was suspended for six months.

Chutima told the court that she had some drinks with friends on Wednesday night before she ran into a police checkpoint.

According to police, Chutima parked her car on Naradhiwas Rajanagarindra Road near the police checkpoint at 2.30am last Thursday morning but she refused to get out of her car or take the test.

She agreed to lower her window a bit to talk to police and gave them her motorcycle driver’s licence. She smelled of alcohol, the police said.

After many hours, police towed Chutima’s car to a police station with her still inside.

“The new Land Traffic Act states that any person refusing to submit to a blood alcohol test shall be assumed as being under the influence and punished by a jail term, or fine, or both,” said First Lt Rattakorn Oatjessada, a deputy inspector at the Bangpongpang Police Station.

Chutima claimed she was shocked when police flagged her down and she decided not to leave her car. She admitted to not carrying a car driver’s licence with her at that time.

She said she would respect the court’s ruling.

AMLO to seize B4bn in assets from former co-op chief