The US Secretary of State Anthony Blinken cancelled the Thai leg of his Southeast Asia tour and his meeting with PM Prayut chan-o-cha after a journalist with the travelling press corps tested positive for Covid-19. Blinken had arrived at his second destination in Southeast Asia, Malaysia, on Tuesday for a two-day visit after he left Indonesia.

The US embassy issued a statement saying that the Secretary would not be coming to Bangkok “out of an abundance of caution” and to protect the health and safety of the US travelling party and those who they would come into contact with. PM Prayut Chan-o-cha’s office later confirmed the cancellation of the meeting at the Government House that was due to take place today at 12:40pm.

The Secretary was in Malaysia yesterday when the journalist tested positive for Covid-19 and he was due to arrive in Bangkok yesterday evening. The party instead rerouted back to Washington D.C. after expressing their “deep regret” and extending an invitation to Don Pramudwinai, the Thai Foreign Minister, to instead visit the United States as soon as possible.

The Secretary was touring Southeast Asia in an effort to counter the growing Chinese influence in the region and reassert US commitment.

In Malaysia, Blinken and his 39-member entourage landed in the country on Tuesday. Blinken attended a bilateral meeting with Malaysian Foreign Minister Datuk Saifuddin Abdullah in Putrajaya today, and later met with PM Datuk Seri Ismail Sabri Yaakob at the Parliament building.

Blinken’s visit is considered crucial as the US seeks to bolster its position in the Indo-Pacific by increasing interaction with Southeast Asia. According to the Malaysian Ministry of Foreign Affairs, also known as Wisma Putra, the visit would give Malaysia and the US a good chance to enhance their multifaceted collaboration and explore new collaborative ventures. 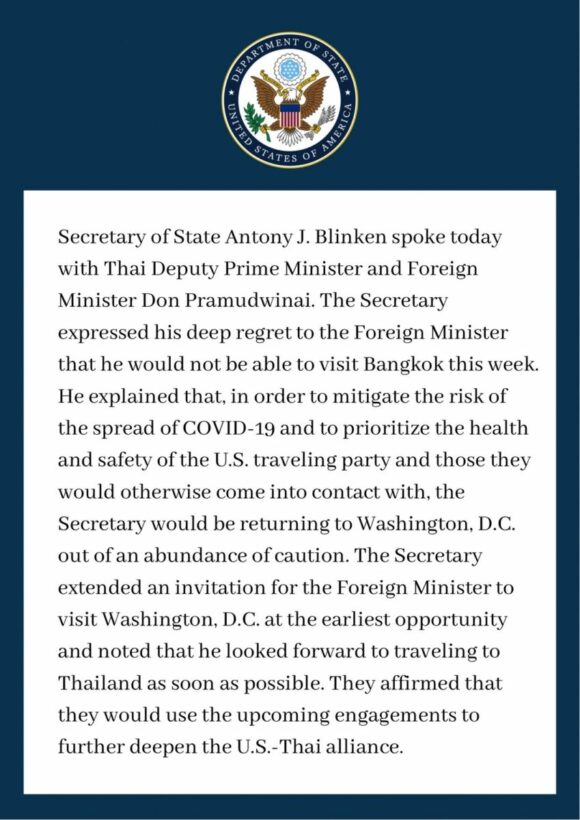 Rain
On 12/16/2021 at 2:11 AM, HolyCowCm said: I seriously think they don't care as they still have support locally and besides they still have their lobster and steak and champagne as are filthy rich from plundering their country's coffers. Only…