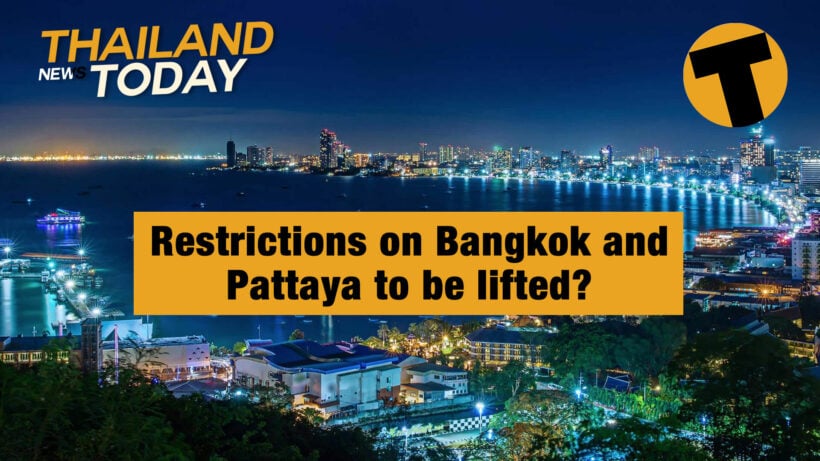 A trailer truck has driven into an accident scene, crashing into 9 vehicles and critically injuring a police officer who was directing traffic in Surat Thani’s main city district. Luckily rescue workers and another police officer were able to jump out of the way before the truck ploughed through the accident scene and into a roadside tyre shop.

2 people are still being treated for minor injuries. Police officers were directing traffic around the accident scene, but the trailer truck with a load gypsum drove through, crashing into 7 motorcycles and 2 pickup trucks. A police officer directing traffic was rushed to the hospital with serious head injuries. A lottery vendor was also injured and sent to the hospital.

The 26 year old driver says he had a problem with the brakes.

After several consecutive days without a local Covid-19 case, Chon Buri, which includes Pattaya, might soon be removed from the government’s list of “red zones” for high risk of Covid-19. Once lockdown restrictions are eased, the coastal province is expected to have an influx of domestic tourists.

The province has been under strict disease control measures and is classified as one of the 5 coastal province with the highest risk under maximum control to prevent the spread of the coronavirus.

Rayong, Chanthaburi and Trat, may also be removed from the restricted list. The CCSA will meet tomorrow and will look into changing the classifications from red to orange.

18 provinces in Thailand’s north and northeast are being hit by a wave of smoke and air pollution as the burning season kicks in for the country’s agricultural sector.

The next 2 months are the peak of the burning off season for agricultural waste as farmers prepare their land for the next crops and use the fires to aid the harvest of some of their crops, like sugarcane.

The Pollution Control Department are now openly admitting that the major cause of the seasonal smoke around much of Thailand is from open burning by farmers who are preparing their land.

The levels of haze and smog in the affected provinces is categorised as “unhealthy” by the IQair.com website

The firms.modaps website, the NASA satellite fire tracking service, shows the number of fires currently alight around Thailand and the concentrations in the north and north east of the country.

Late night diners rejoice. Your option to eat all that great Thai food around the country looks to be back on the table as the government is considering lifting some of the current restrictions on dining and business operating hours.

Deputy Prime Minister and Public Health Minister Anutin Charnvirakul has announced that they’re likely to lift restrictions on dining, currently set at 9pm, by the end of this week.

The Thai Restaurant Association have been lobbying hard for an extension of the opening times for in-restaurant dining times to at least 11pm.

The CCSA will gather on Friday to assess the current Covid-19 situation and decide if the extension is viable at this time. But the Public Health Minister maintained that alcohol will still be prohibited and other precautions like hand-sanitisers at entry points and social distancing will still need to be strictly applied.

Today has seen another day of high numbers of new Covid-19 infections with another 819 cases reported along with 1 new death.

There are now 4,335 active Covid-19 cases but many of the patients remain asymptomatic and are taken to state quarantine for a 14 day stay.

More than 700 of the new 819 cases were detected in tracking and tracing in Samut Sakhon. Most of the cases involve migrants, many who work in the local seafood processing factories.

A 56 year old Thai man in Samut Sakhon also died in the past 24 hours as a result of his Covid-19 infection.

Join our YouTube channel today and become a Thaiger Legend or a Thaiger Cub for behind the scenes footage and other member-only perks.