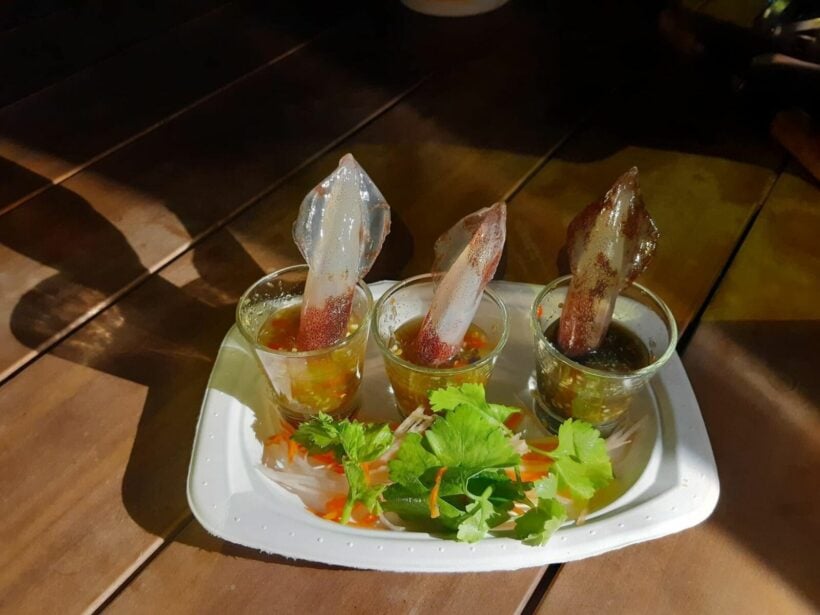 Live squid dumped in a shot glass with a spicy Thai sauce, and then consumed while the squid is still squirming, has been a new food trend in Thailand, with many sharing the phenomenon on TikTok and other social media outlets. But the director of the country’s Department of Health is warning people that the so-called “squid shots” could be dangerous.

Here’s how it’s made. In a shot glass with a spicy and sour chilli sauce, a live squid is dumped in. Some people leave the squid in the sauce for a few minutes, while it attempts to swim, soaking in the spices. Others will dump it for a quick dip and eat it immediately. If the squid is small enough, some people eat it whole. (See video below)

The Director of the Department of Health, Suwanchai Wattanayingcharoenchai, says raw squid can contain the vibrio parahaemolyticus, a bacteria found in marine environments which can lead to acute gastroenteritis (diarrhoea and vomiting) if consumed.

He warns that severe food poisoning from eating raw squid can then lead to ulcerative colitis, which is a more long term condition where the rectum and colon are inflamed. Nasty.

Other than that, squid and other sea creatures can carry parasites which can also lead to stomach aches, diarrhoea and other reactions if eaten raw by humans.

The authorities shared that the best way to safely eat the squid shots is to cook the squid first. It is recommended that food should be cooked at least 70 degrees Celsius for 2 minutes. They added that ingredients should be clean and washed thoroughly before cooking.

SOURCE: The Department of Health