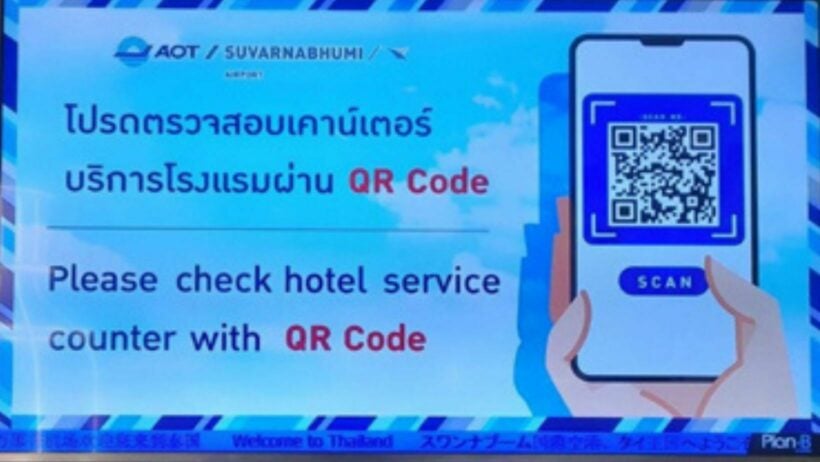 Travellers are being recommended to download a QR code had been created and is available from April 14 at Bangkok’s Suvarnabhumi Airport, aka. BKK. Airport management are claiming the new QR code will assist them and help them to find the booth of their booked hotel.

After numerous complaints, confusion, and congestion in the arrival area, angry visitors looking for their hotel’s name after exiting the baggage pickup area, Bangkok’s International airport came up with a QR code to help solve the problem. In other words they’ve added a new layer of potential confusion to the many steps they currently need to re-enter Thailand.

Suvarnabhumi Airport previously had only 8 booths serving around 400 hotels. With high demand, 9 extra booths have now been added.

To create the QR code, the airport collaborated with Thailand’s Tourism Authority, hotels, and travel companies.

Kittipong Kittikachorn, the airport’s general manager, said the QR code will tell travellers which desk to go to.

Travellers into Thailand, including Thai citizens, have had to navigate the much-altered Thailand Pass since November last year. Travellers now have to upload vaccination documentation, pre-booked accommodation for 1 night and a pre-booked PCR test. The on-arrival test may be dropped, following recommendations to the CCSA, from May 1. But the CCSA say they will wait to see what happens, regarding Covid cases, until April 22 where a decision about the future of the Thailand Pass will be made.

Thaidup
Funny how even if the people have had all vaccines and the boosters they still have to go through all the same stuff as a person that is pure. LOL. What a joke.🤣 It might make one think, no?🙂