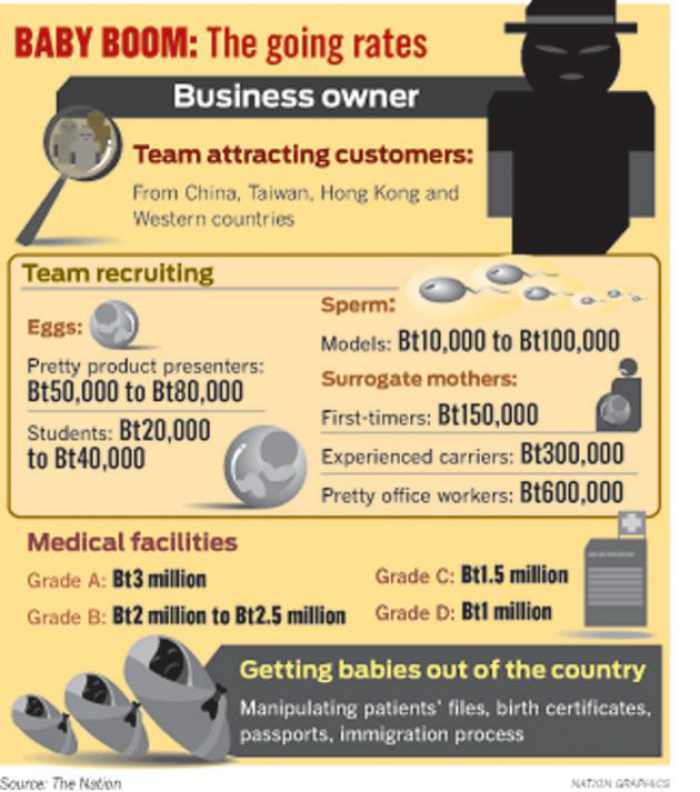 PHUKET: A commercial surrogacy operation has “exported” more than 100 babies and earned more than Bt50 million each year, according to a young woman who claims to have sold her eggs to the ring.

Her eggs were reportedly embedded in women who had agreed to be surrogate mothers.

Identified only as “Irene”, the 25-year-old spoke up after the ring failed to pay her Bt60,000 for her latest egg.

“I’d never thought the agent would cheat me. We had been in contact for quite a long time,” she said.

She is also angry that the ring – led by a former nurse – thwarted her own efforts to attract egg buyers.

Irene usually works as a product presenter at events and knows a lot of pretty girls in the same profession.

According to her, buyers generally have a preference for good looks when they are shopping among willing sellers of their eggs and sperm.

“There is sperm from medical students for sale, too,” she said.

Most of the customers are Asians, including Chinese and Taiwanese.

“Some customers will request that the sellers of eggs or sperm look like them,” Irene said.

Identifying the former nurse leading the surrogacy ring by the initial “T”, she said: “From what I know, two other rings offer similar services.”

The T-led ring offers four options for its prospective customers, with prices ranging from Bt1 million to Bt3 million-plus, she said, adding that it used the services of not just fertility clinics, but also some well-known hospitals.

The ring usually seeks to recruit pretty women in their early 20s as egg sellers, she said.

“Prospective sellers must undergo check-ups. Even if they don’t pass the check-ups, they will be paid Bt3,000 to Bt5,000 for their time. But if the check-up shows they are physically fit, they will get between Bt20,000 and Bt80,000 per egg,” she explained.

Sperm is available too, with some handsome models offering theirs for sale at about Bt100,000 per time.

Although Irene has never served as a surrogate mother, she has heard about their attractive pay rates.

“Each pregnancy can earn a surrogate mother between Bt150,000 and Bt600,000,” she said. Surrogate mothers for the T-led ring must be no more than 33 years old and have given birth to babies before.

Irene said customers would be charged extra if they wanted help from the ring in sending the babies out of Thailand.

In some cases, the customers would have the surrogate mothers fly to their homeland and give birth there.

“I know a woman who gets Bt700,000 for travelling to Australia for a child’s birth,” she said.

Kamthorn Pruksananonda, who chairs the Royal Thai College of Obstetricians and Gynaecologists’ subcommittee on reproductive medicine, has expressed concern about emerging information such as this. He pointed out that while the draft law on surrogacy would regulate such services, it might not be able to address the complexity of related human-trafficking activities.

“What if the babies are exported by human traffickers?” he said.

This is the first part of The Nation’s series on the surrogacy scandal. More reports on this hot issue will follow.

Student loan ceiling to be reduced