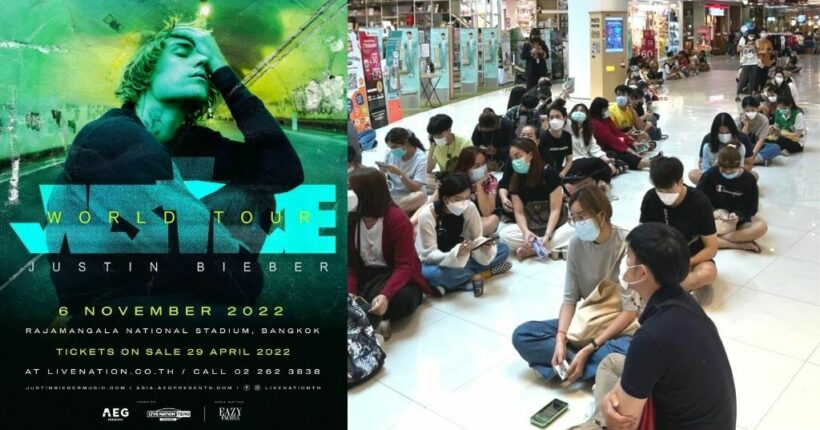 Justin Bieber Justice World Tour tickets have been scalped and resold for more than one million baht. The promoter’s official account says… “This is too much!” and warns of the cancellation of scalped tickets.

Justin Bieber announced his Justice World Tour in Bangkok, and it will hit Rajamangala National Stadium on November 6. The ticket prices started at 2,500 baht, and the most expensive ones were 16,500 baht. Today, the promoter, Live Nation Tero, opened the system for Beliebers to reserve their places in the ticket queues at 9 am and to start buying at 10 am, both online and at the counters all over the country.

The first drama started after the on-site counter started selling the tickets before the online channel. Some netizens said that they waited in an online queue for more than 2 hours and ended up with nothing. People from Twitter revealed they ended up with access to tickets more than 1 hour after those who bought at the physical counters.

Staff at the counters announced that the tickets were already sold out while many were still waiting in the online queue.

Another drama came hours later when tickets started surfacing online being sold at ridiculous prices. Firstly, the most expensive ticket at 16,500 baht was doubled to 39,500 baht, and the cheapest one at 2,500 baht was offered at more than 10,500 baht.

The situation got out of control quickly and ticket prices started going for 200,000 baht per ticket, no matter where the seat was. One netizen revealed that seats in Zone A, which were expected to cost about 6,500 – 7,500 baht, were being resold at more than 1 million baht via the ticket exchange and resale website viagogo.

“This is too much! The tickets are the promoter’s assets and aren’t allowed to resell for personal benefits or transferred to others. If anyone breaks the rules, the promoter has the right to revoke the tickets without informing in advance and would not refund.”

Many netizens also warned each other to beware of the fake account, dodgy tickets and scams, and others kept complaining about the scalpers through the hashtag #JusticeTourBangkok.