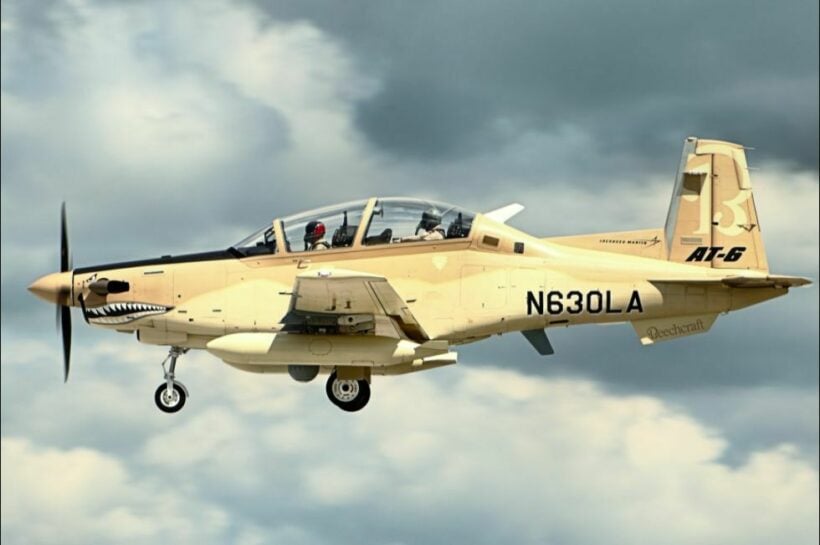 The Royal Thai Air Force signed a contract on Sunday to buy a new fleet of aircraft. These will come from Textron Aviation Defense, an American aircraft manufacturer that builds planes for the US military. The US$143 million, or about 4.86 billion baht, deal was made on the first day of the Dubai Airshow.

The RTAF is set to purchase 8 Beechcraft AT-6 Wolverine light aircraft from the American defense manufacturer. It will also include supporting equipment and necessary spare parts. These light aircraft are meant for the RTAF 41st Wing light attack operations unit, which is based in Chiang Mai. Air Marshal Pongsawat Jantasarn heads that committee that approved the purchase of these planes, and he explained his decision.

“RTAF pilots and concerned parties found the attributes of the AT-6 procurement programme very favourable… It will also benefit both Thai and US interests, strengthening the enduring strategic partnership between our nations.”

Thailand is working on developing its own domestic defense industry, reports the Nation Thailand. This plan is known as the S-curve 11 strategy, and will involve RTAF pilots and maintenance crew being trained by Textron Aviation Defense in the coming years. After construction and training, the new aircraft will be officially introduced into the Thai air fleet by 2024. President and CEO of Textron Thomas Hammoor commented on the strategic importance of the deal.

“We are honoured the Royal Thai Air Force has selected the Beechcraft AT-6 to conduct a broad array of missions in support of its border security and its anti-smuggling, counter-narcotics and anti-human trafficking operations…The RTAF is a key US security ally and operator of one of the most advanced air forces in Asia-Pacific. Its extensive market research and stringent procurement process sought the alignment of best cost, schedule, and performance to replace its existing fleet of aging Aero L-39 Albatros aircraft and advance the capabilities of its fleet with the latest technology.”

gummy
1 minute ago, AlexPTY said: did Air Chief Marshal Fufu just left Thailand? Who's gonna fly this one? Didn't he pass away ?

AlexPTY
1 minute ago, gummy said: Didn't he pass away ? you right RIP 2015. i am sure there is a FuFu the Second

gummy
4 minutes ago, AlexPTY said: you right RIP 2015. i am sure there is a FuFu the Second Other news sources this week say an entire "Wing" of them very recently flew away. Possibly a joint exercise with the German…

steve860
27 minutes ago, gummy said: Other news sources this week say an entire "Wing" of them very recently flew away. Possibly a joint exercise with the German Shephard dog air force 😂 They'll be a 'dog fight' for sure.