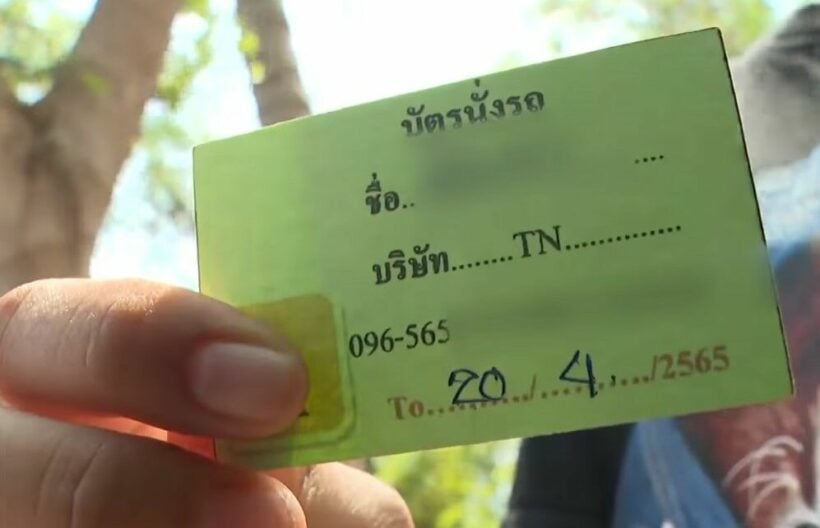 The screenshot shows the special tickets that the Burmese migrants claimed to buy from Thai police.

Four police officers from the main city Samut Sakhon Police Station, south west of central Bangkok, were dismissed from their positions after being reported for allegedly selling “special tickets” to trafficked Burmese migrants. The tickets required Burmese migrant workers to pay a monthly fee of 500 baht and carry the tickets everywhere to avoid arrest.

On April 19, Thai media reported on the Facebook page, The EXIT Thaipbs, that they received information about the special tickets from the Burmese migrants living in Samut Sakhon. The page said Burmese people in the area called it “500 baht tickets” because they had to pay the officers 500 baht every month to avoid arrest.

The ‘ticket’ just looked like a local bus ticket. It was a small piece of paper that featured the name, company name, phone number, and the expiry date. The page also claimed that one Burmese migrant insisted that the police immediately released him after seeing the ticket.

The investigation started after the story went viral. The Commissioner of Provincial Police Region 7, Thanayut Wutcharatthamrong, says that the authorities were now going to investigate the situation.

Yesterday, Thai media reported that the commissioner side-lined 4 police to office duties as the allegations are investigated. They will now be working at the Office of the Provincial Police Region 7 from yesterday until the completion of the investigation.

The 4 dismissed officers includes the superintendent, deputy superintendent, inspector police and a squad leader. The superintendent of the main city Samut Sakhon Police Station announced that he was ready to stand down from his position and is willing to be questioned.

Zorba_the_Geek
The uniforms are a certain shade of brown for a reason... 😏💩

Soidog
Makes a change from immigration officers selling visas. Roll up Roll up, 18,000 baht gets you an annual retirement extension. Simply incredible.
HiuMak
9 hours ago, Thaiger said: Four police officers from the main city Samut Sakhon Police Station, south west of central Bangkok, were dismissed from their positions after being reported for allegedly selling “special tickets” to trafficked Burmese migrants. The tickets…

PapayaBokBok
12 hours ago, Noble_Design said: Where can I buy this? 7-11

PapayaBokBok
I did a visa run to mae sai--burma border years ago Many police checkpoints coming back---i see a burmese hand off baht to a cops who palms it as i always sit in back row on local bus.......the NEXT stop…

Donated Covavax doses to be offered to the unvaccinated, people with allergies