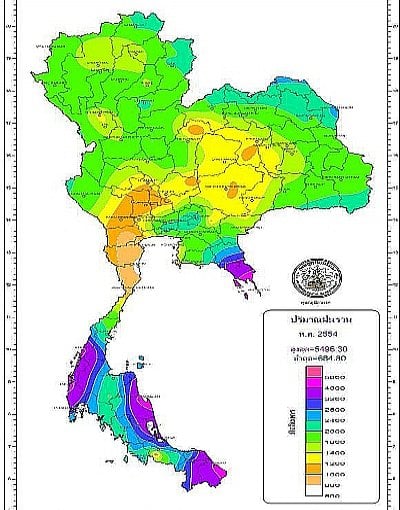 PHUKET: Following a stretch of hot weather, greater Phuket Town was hit by thunderstorms and torrential rainfall late yesterday afternoon. At about the same time in Muang District Krabi, a fierce squall damaged homes and felled rubber trees in a surrounding plantation in Khao Khraam subdistrict.

The squall hit the rubber-tapping community of Khao Khraam Village 5 at about 5pm, causing damage to at least 10 homes and uprooting some 100 rubber trees in the area.

Rubber plantation owner Jehsen Wanramhan, 49, said the storm lasted only about 10 minutes, but ripped the roofs off some houses and caused considerable damage to every home on both sides of the street. No injuries were reported.

Phuket Town was hit with a thunderstorm starting at about the same time, with heavy rain also reported in parts of Rassada, Koh Kaew and Chalong.

The latest synopsis by the Meteorological Department’s Southern Meteorological Center at Phuket Airport shows easterly winds prevailing over the entire Andaman Coast and out over the Andaman Sea.

The 24-hour forecast for Phuket, Phang Nga and Ranong calls for continued hot conditions with scattered thundershowers over 40% of those provinces and isolated heavy rain with wind gusts.

There are similar forecasts for the other Andaman Coast provinces, with scattered showers expected over 60% of Krabi, Trang and Satun.

Wave heights are expected to be about one meter offshore, and about two meters in areas with thunderstorm activity.

Nakhon Sri Thammarat Town remains the rainiest place in Thailand so far this year, with 1,208mm year-to-date through yesterday, when another 15mm of rain hit the town.

The year 2011 was the wettest in Thailand since the country began monitoring rainfall back in 1951, according to the Thai Meteorological Department.

However, now just three months into 2012, droughts are being reported in 32 provinces in Isarn, Thailand’s northeastern region.

Phuket Live Wire looks at Windows 8: ‘You probably won’t like it’