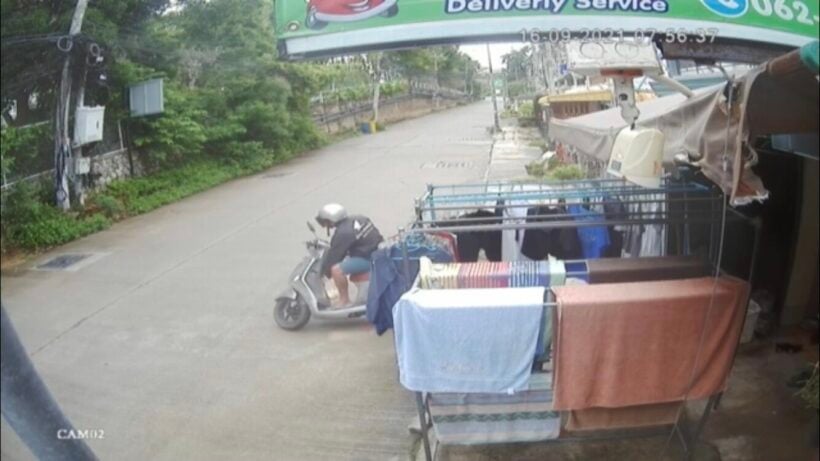 Pattaya women who dry their clothes outside beware: a panty snatching thief was recently captured on CCTV as he stole women’s undergarments from a laundry shop in Pattaya. The 36 year old shop owner who is referred to as Onuma says that last week a motorbike driving man stole 8 women’s panties that were drying on a clothesline in front of her shop.

The Pattaya News says the CCTV footage they were shown does appear to show a helmet-wearing man snatch the goods before making his quick getaway. Onuma says that she wanted to make sure the media was aware of the matter and she has already filed a police report. The laundry shop owner says she’s afraid that this person may be a very disturbed individual who needs to be caught.

Pattaya police have confirmed they viewed the CCTV footage and say they are now looking to catch the thief using the license plate from his motorbike. As of this writing, the panty snatching criminal has not been caught.

The Pattaya underwear nabber is far from the first time such an incident has been reported in Thailand. In March, Phuket police searched for a thief who was stealing ladies underwear out of their homes. In  December 2020, a man was arrested for undergarment pilfering in Chiang Mai and in October of the same year, one prodigious thief was busted for stealing 70 panties and 3 bras. Similar thefts happened several times in 2018 as well.

PapayaBokBok
Is this anyway related to Thai Penal Code #698008s?.... Is the reason I go commando in LOS--which is apparently illegal -!!!!? Catch me if you can!
JackMeOff
There is a big market on Craigslist for used / second hand unwashed ladies panties. If the stolen ones are cleaned, he can tell his grandmother to wear for a few hours.