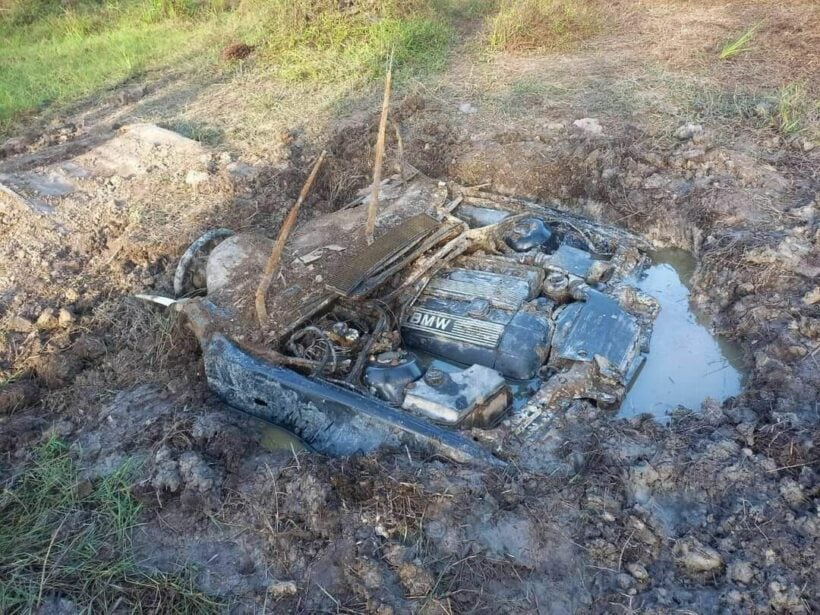 A car was found buried at a palm plantation in the southern province of Nakhon Si Thammarat… but what is interesting about the case is that the vehicle belonged to a 52 year old American man who, according to reports, left the country 10 years ago.

The bronze BMW had been buried about a metre deep. Police and forensic officers were called to the scene. Once the vehicle was uncovered, officers checked the registration numbers and found the car was owned by an American man named Michael.

Officers went to a home in Phuket that the man used to rent. Neighbours shared that they used to see the man driving the BMW car before, but he left the house long ago.

Reports say that the man travelled out of Thailand through the Suvarnbhumi Airport immigration checkpoint a decade ago on February 12, 2012. Thai authorities are now trying to contact the American for more information. The palm plantation owner will also be investigated to find a connection to the case.

The Commander of Nakhon Si Thammarat Police Station told Thai media that the car might be used for illegal acts and buried to hide the evidence, adding that it could be related to a drug gang and a car dismantling gang. The commander says officers need to do more investigating, but adds that he suspects malintent.

robsamui
Yawn. Nothing happening in Thailand today, then. ZZZZZ
HiuMak
some people do the funniest things

longwood50
Farmer reported to have ad on Kaidee offering used BMW with low kilometer used sparingly during the past 10 years.
Santa
On 2/2/2022 at 7:43 PM, Cathat said: Most likely the guy sold it to somebody cheap for cash and it was never re registered.probably was used in illegal activities for a while then disposed of. Easier ways to dispose of…

riclag
Me thinks he didn’t want the x wife or Gf to have it ! So he had it buried out of spite !