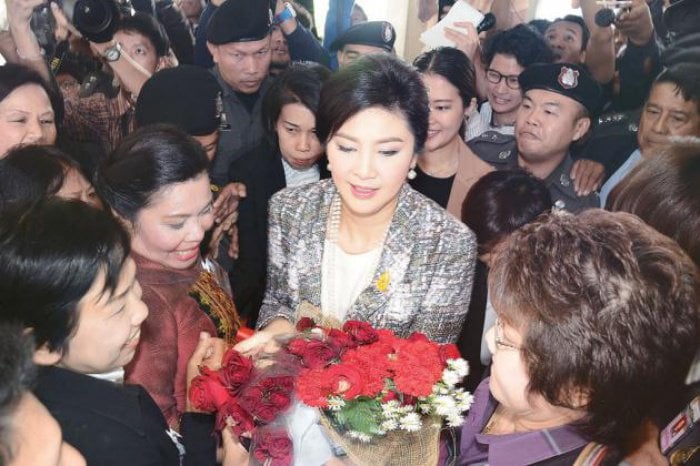 PHUKET: Pressure is mounting on the National Legislative Assembly (NLA), which votes today on whether to impeach former prime minister Yingluck Shinawatra and two former parliamentary speakers accused of wrongdoings.

Supporters and detractors of the three targeted politicians – Ms Yingluck, former Parliament president Somsak Kiartsuranon and his ex-deputy Nikom Wairatpanij – have urged the NLA members to vote with their conscience.

Social media yesterday was agog with campaigns from both sides. People supporting impeachment said it was a necessary step towards national reform while those opposing impeachment warned of renewed conflicts if the NLA votes to punish the trio.

Observers, meanwhile, expect the impeachment vote to polarize the nation. “No matter which way it goes, there will be those who agree and those who disagree. It won’t please everyone,” Reuters quoted NLA vice president Peerasak Porchit as saying.

Either way, the vote would create dissension against the junta, said Paul Chambers, director of research at Chiang Mai University’s Institute of South East Asian Affairs. “Ultimately, no matter which way the NLA votes, it will create dissension against the NCPO by either pro- or anti-Thaksin elements of Thai society,” he said, referring to former premier Thaksin Shinawatra.

Support from at least three-fifths of the 220-member NLA, or 132 votes, is required to impeach any of the targeted politicians.

An impeached politician will face a five-year ban from holding political office.

The National Anti-Corruption Commission (NACC) accused Ms Yingluck of negligence of duty by failing to curb corruption in her government’s rice-pledging scheme, and former House speaker Somsak and Senate ex-speaker Nikom of violating the constitution while chairing parliamentary meetings on charter amendments.

The People’s Democratic Reform Committee (PDRC), which held street protests against Ms Yingluck’s government, yesterday called on the NLA members to decide with their conscience.

“It is now the NLA’s task to prove that morality and ethics exist in Thai society,” PDRC spokesman Akanat Promphan said in a phone interview with The Nation.

He said Ms Yingluck failed to provide satisfactory answers to NACC’s accusations in her closing statement.

He also said that as the country has been under the control of the National Council for Peace and Order, the red shirts have been unable to do much in campaigning publicly about this matter.

A politician from Ms Yingluck’s Pheu Thai Party, Somkid Chueakong, said yesterday that he expected increased voter support for the party in the next general election if the NLA votes to impeach Ms Yingluck. Defence Minister Prawit Wongsuwan yesterday criticized certain red-shirt leaders for having warned that a decision to impeach Ms Yingluck could lead to bloodbath or riots.

“Such talk is not good for the country, which is now progressing well. They must use more brains before such talk,” he said.

Mr Prawit, who is also deputy PM, said the government was not seeking revenge or acting against anyone. “We are just solving the country’s problems and helping the country to move forward.”

Meanwhile, Ms Yingluck said after presenting her closing statement before the NLA that she felt satisfied for “explaining everything” to the assembly members. “I feel happy,” she said when asked to describe her feelings.

Ms Yingluck’s lawyers were also satisfied with her explanations in response to all the allegations against her, said Pichit Chuenban, one of the legal team members.

He also said that NACC member Wicha Mahakhun, who represented the agency in presenting the closing statement yesterday, appeared to rely on rhetoric in a bid to persuade the NLA members.

The lawyer also urged NLA members to carefully consider all the documents presented by Ms Yingluck’s legal team to support her case, before voting today.

Mr Wicha yesterday also voiced satisfaction with his closing statement. “Whether the NLA will vote for impeachment or not, we have created a new standard for the country’s reform,” he said. Before leaving Parliament yesterday, the ex-PM was handed flowers by a small group of supporters. Ms Yingluck is expected to watch a broadcast of the NLA vote today at SC Park Hotel, which is owned by her family, according to a source close to her.

Starting at 10am, the NLA is scheduled to hold a secret ballot whether to impeach Mr Somsak and Mr Nikom, followed by a vote on Ms Yingluck’s case later in the day.

NLA member Wanlop Tangkananurak said that after listening to their closing remarks yesterday, he feels that both sides had not produced any new information that was different from their opening remarks last week.

He stressed that reconciliation and impeachment are entirely different issues and the NLA members should make decisions based strictly on legal principles.

“I can’t answer for other NLA members but mention of the word ‘reconciliation’ was less frequent during our impeachment conversation,” he said.

Regarding the contrasting information produced by both sides, including the estimated total loss caused by the rice scheme, Mr Wanlop said in his opinion the official figure produced by the Rice Scheme Accounting Committee, which the NACC used as its reference, has more credibility because it came from an official committee.