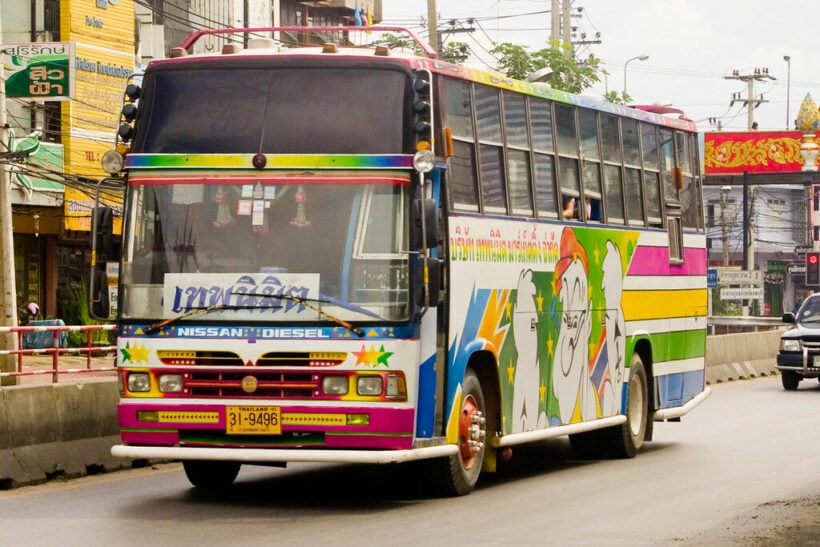 All interprovincial public transport services have been suspended in the 13 “dark red” provinces under maximum control to curb the spread of the coronavirus, the Department of Land Transport announced today. Domestic flights in and out of those provinces have also been suspended. The suspensions are in place at least until August 2.

The public transportation company, known as BorKorSor, announced that all interprovincial bus services on northern, northeastern, eastern and southern routes will be suspended until August 2. The bus services will still be delivering parcels. The president of the transport company said the suspension is in line with the government’s advisory to avoid interprovincial travel to prevent the spread of Covid-19.

The Civil Aviation Authority had also announced that domestic flights to and from “dark red” provinces would be suspended until August 2, with the expectation of flights for medical services and connections for those travelling through the “Phuket Sandbox” or “Samui Plus” reopening schemes.

Many people decided to leave Bangkok just before the suspension. At Bangkok’s Don Muang International Airport a number of flew back to their hometowns. Some travelled back home by van this morning. 30 public vans were in service with routes to Chon Buri and Rayong before the services were suspended at 1pm today.

City buses in Bangkok are still running, but the number of passengers allowed on board has been reduced to 50% capacity and people must abide by social distancing practices. The Bangkok Mass Transit Authority also changed the bus timetable to 5am to 9pm to abide by restrictions imposed by the government.

Checkpoints are being set up in the provinces to monitor interprovincial travel. A spokesperson for the CCSA says those travelling out of “dark red” provinces will need to request approval before travelling.

exiledlikecortez
Hi, i've to catch a international flight next week at Bangkok Airport. I'm in Chiang Mai right now. What are the options to get from here to Bangkok? i'm in a similar situation. in CM at the moment, but…

AdvocatusDiaboli
@exiledlikecortez happy trails Hans.
exiledlikecortez
seems all travel from CM now shut down until mid-august, if not the whole month. sigh