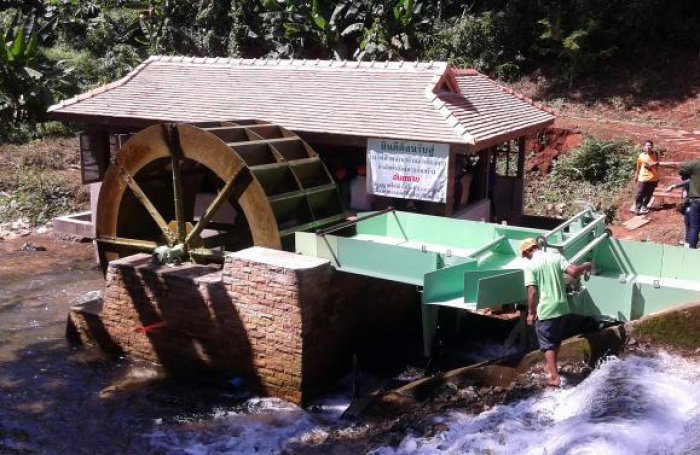 BANGKOK: Vocational teachers and students have joined forces with local people to construct a hydropower plant at the foot of Doi Luang Chiang Dao Mountain in Chiang Mai.

Manus Daomanee, president of the Toyota Automotive Technological College, is credited with starting the innovative project in the remote location.

Mr Manus hopes his charity-funded project will provide free electricity for a local school and temple starting next May.

“This power plant may additionally be able to provide free lighting on local and public roads at night, as the school and the temple won’t need to use much electricity after nightfall,” said Mr Manus.

Nestled as it is in a timeless rural setting, the mountain has attracted a high number of tourists over the years. Mr Manus was one of those tourists and he was inspired to start the project during cycling trips to the area. During his many visits, he noticed that a stream by the Doi Luang Chiang Dao Mountain never ran dry.

“It has water in all seasons. That’s why I believe it should be possible to set up a hydropower facility here for a good cause,” he said.

Mr Manus turned his ideas into action, encouraging his friends, who had solid knowledge of hydropower technology, to check the water flow in the Doi Luang Chiang Dao Mountain and inspect a hydropower plant in a nearby village.

He also held meetings with locals to find out if they would agree with his idea.

After he got the green light, he raised 3 million baht via two merit-making campaigns.

Lecturers and students from Samut Prakan Technical College have also jumped on the bandwagon. With their help in welding, designing and assembling, key parts of the 100-kilowatt hydropower plant have already been installed.

“I think we will launch one more charity campaign to raise additional funds for this project. We need some more money to buy equipment such as a transformer and electric wires,” Mr Manus said.

He also hopes this project can become a learning center in the future.

Wimon Sripakdee, a local resident who also serves as a tour guide and village-defence volunteer, said he had taken part in the hydropower plant project from the very beginning and is keen to embrace Mr Manus’s initiative.

“I would like to contribute wherever I can. I am ready to learn new things and help run the power plant,” he said.

Taweesak Khiewthong, director of Samut Prakan Technical College, said the project has provided vocational students with a good opportunity to work on a real project.

“This project also gives a boost to the image of vocational students. It is in line with the government’s policy to encourage students to put their knowledge to good use,” he said.

“Through such collaboration, vocational students and teachers focus not just on learning and teaching at their institutes, but also on how to apply their knowledge to benefit society and community,” Mr Wanit said.