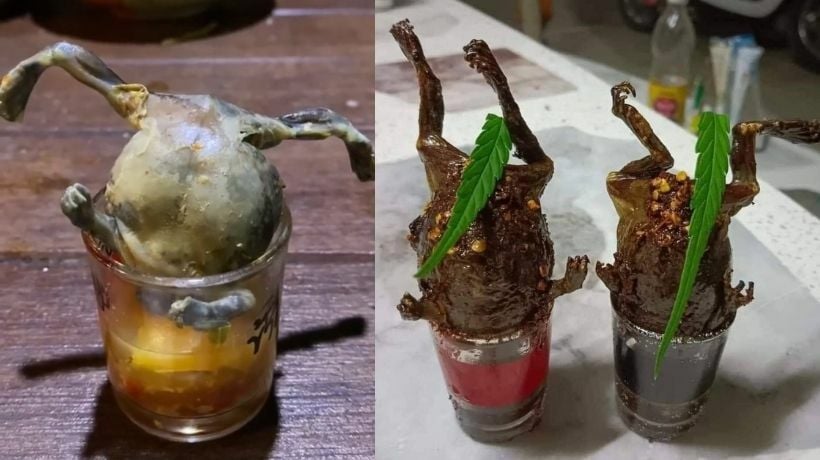 “Bullfrog shots” have become a new popular item on the menu around Thailand after going viral on Thai social media. The “shot” is comprised of a cooked bullfrog, spicy sauce, and dried chillis for garnish (but doesn’t contain alcohol). After the dish gained popularity, the Department of Health issued a warning that bullfrog shots could contain parasites and that anyone making them should ensure the bullfrog is cooked properly before eating.

The bullfrog shot is an amphibious spinoff of the “squid shot” that exploded on Thai social media several months ago and began to be served in seafood restaurants across the country. The squid was served raw in a shot glass filled with spicy sauce. The Department of Health warned the public that they could get food poisoning from eating raw squid due to bacteria found in marine environments.

The bullfrog is supposed to be a safer alternative, and has been given the green light by the Department of Health, so long as it is cooked properly. Bullfrog is commonly eaten in Thailand, especially in northeast Thailand, and only went viral this time for its unique serving style. If the bullfrog is thoroughly cleaned and cooked, it is safe to eat, according to Director-General of the Department of Health Suwanchai Wattanayingcharoenchai. He said bullfrogs are amphibians and usually have parasites living inside them. He recommends cooking the bullfrog for at least 2 minutes at a temperature of at least 70 degrees Celsius.

Suwanchai said Thailand hasn’t studied the nutritional value of bullfrog meat, but it is considered to be high in protein and low in cholesterol. The department suggests eating bullfrog with vegetables for a nutritious meal.

Noble_Design
So mango sticky rice is no longer the "in" thing now? Fads sure change quickly
Ramanathan.P
When compared to "Sticky" and "Shot"....In Thailand "Shot" always supersede sticky. It is always "Shot" first followed by "Sticky"

Nobodysfriend
Yak Uak ...
TWS60
I thought they were referring to the green mixed cocktail "Bullfrog", popular when I was tripping around Philippines in the late 80s. That was actually good, and strong enough to kill any stray parasites swimming around in the crushed ice.…