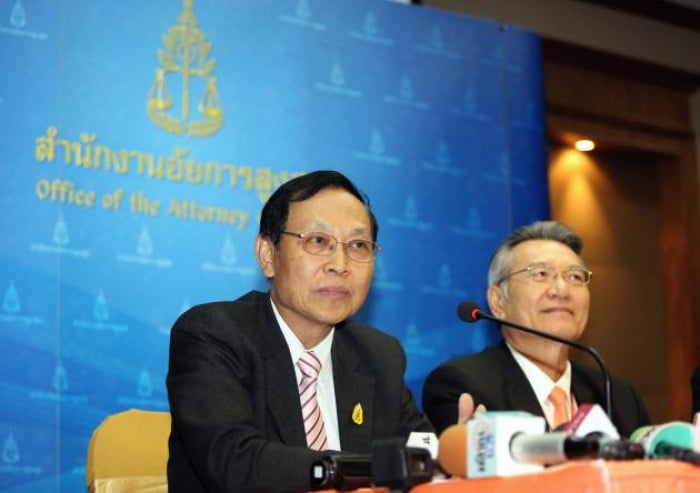 PHUKET: Public prosecutors indicted ex-PM Yingluck Shinawatra yesterday for negligence and filed criminal charges at the Supreme Court, in a case that could result in a jail term of up to 10 years.

The charges stem from the Yingluck government’s controversial rice-pledging scheme, which caused 600 billion baht losses to the state.

“We have indicted former prime minister Yingluck Shinawatra for dereliction of duty,” said Chutichai Sakhakorn, director-general of the Office of the Attorney-General’s Special Litigation Department.

In filing the case, public prosecutors submitted 20 boxes of documents relating to the case, said Kosonwat Inthujanyong, deputy spokesman for the Office.

The Supreme Court’s Criminal Division for Holders of Political Positions will decide on March 19 whether to accept this case for trial, court secretary Theerathai Charoenwong said.

The court’s general meeting will be held within 14 days to vote on the selection of nine judges to hear the case, according to the court secretary.

He said that according to the Penal Code, dereliction of duty carried a jail term of between one and 10 years, and a fine of between 2,000 and 20,000 baht.

Ms Yingluck did not attend the indictment but she was represented by her legal team.

Her lawyer Norawich Lalaeng said she had no plans to travel overseas following rumors she might try to flee the country.

He said Ms Yingluck was not obliged to appear during the indictment because she was not yet a defendant but she would report to the court if the case went on trial.

He also submitted to the attorney-general Ms Yingluck’s appeal for fair treatment in this case. Mr Kosonwat accepted the letter. Ms Yingluck has no concerns about the legal cases against her and is ready to fight all of them, Mr Norawich said.

He said Ms Yingluck’s legal team would discuss next week what to do in response to the expected filing of a civil case against ms Yingluck by the Finance Ministry in which 600bn baht in damages would be sought as a result of the rice scheme.

The Finance Ministry will next week discuss with legal experts from the Office of the Attorney-General and Council of State about pursuing a civil case against Ms Yingluck and other members of her government who are considered responsible for damages stemming from the rice scheme, permanent secretary Rungson Sriworasat said yesterday.

The meeting will discuss this matter in detail, such as whether the Finance Ministry should be considered a damaged party, he said.

A source close to Ms Yingluck said she felt she was being treated unfairly, and that she had implemented the rice scheme with good intentions.

“She has accepted her fate but is determined to fight the case to the end. She will not escape ,” the source said.