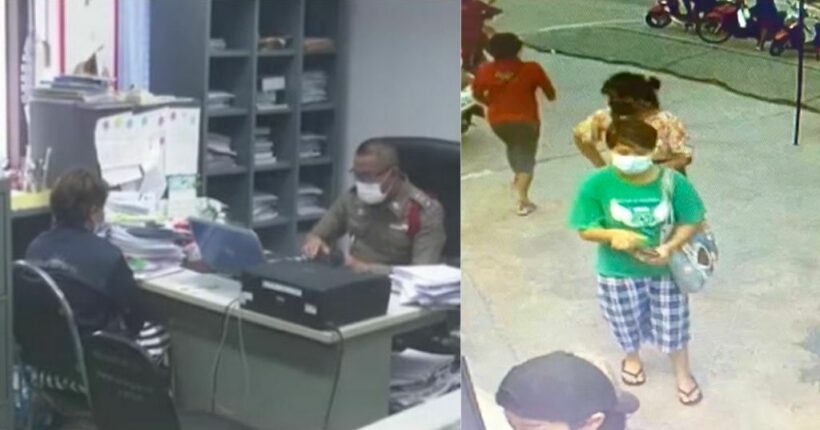 Chon Buri police officers arrested a woman working as a nurse at Bang Lamung Hospital for allegedly stealing 4,500 baht from a dying patient. Police say the nurse confessed that she stole a debit card while the patient was unconscious inside an emergency room on February 1 and withdrew money from an ATM the next day.

The patient’s family says the man was admitted to the hospital and was seriously ill. Due to the Covid-19 situation, the family wasn’t able to visit the patient. He later died and the family went to pick up the body and the assets. They discovered that his money and debit card were gone from his wallet. There was also an SMS message saying that money had been withdrawn from the bank. The patient’s niece then filed a report with the Bang Lamung Police Station.

The police checked on the CCTV installed at the ATM where the money had been withdrawn. At the same time indicated on the bank system, the footage featured a woman with short hair wearing a green shirt and plaid pants withdrawing money. The police contacted the hospital to check on the nurse who cared for the victim and found that the identity was matched.

The suspect is a 29 year old nurse who has been working at the hospital for over 10 years. She was charged for a burglary in a state organisation and using the electronic card belonging to others to withdraw money without permission.

Thai media says the woman insisted that she had never done anything like this before, adding that she was facing financial problems. The patient’s daughter says the family is still waiting for the hospital to show their responsibility for the incident.

Cabra
1 hour ago, DoUKnowWhoIAm said: Ok, in that case you're forgiven.. Not She probably will be... Thai on Thai crime... simple wai and 4500 baht restitution, and all is forgiven
Jason
A sign of desperation or opportunism...or both...
HolyCowCm
She will be transferred like the norm.