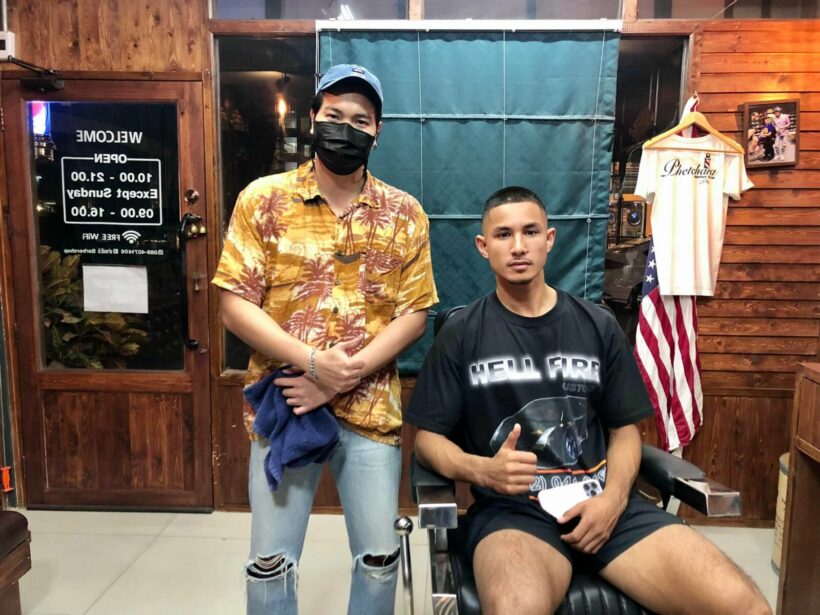 Men are flocking to a barbershop in Chon Buri after the nephew of the Sultan of Brunei came in for a haircut. Faiq Jefri Bolkiah, who is also a professional footballer, recently started playing for the Chon Buri Football Club and has become very popular among Thais, many saying he is friendly.

The owner of Chang Tee Barbershop says many people have been interested in coming into the shop after Faiq’s haircut, adding that it’s a good opportunity for his business to recover after losses brought on by the Covid-19 pandemic.

The barbershop owner says many clients are now interested in cut similar to Faiq… a clean skin fade, from a zero to number two clipper guard. A skin fade is now the most popular haircut at the shop.

The 28 year old barber who cut Faiq’s hair, Teerapat Mungmee, says many of his clients are from the football club. So when Faiq needed a haircut, they recommended Teerapat. On his Facebook page, Teerapat posted a photo of the haircut with the caption “Sit back and chill, your highness. I will get you the perfect look.”

Prince Faiq Jefri Bolkiah is the nephew of Hassanal Bolkiah, the current Sultan of Brunei. He is recognised as the richest footballer in the world with an estimated net worth of US$20 billion. He is the captain of the Brunei national team and now also playing for the Thai club Chon Buri FC.

DoUKnowWhoIAm
I heard the barbershops with topless ladies are doing better.