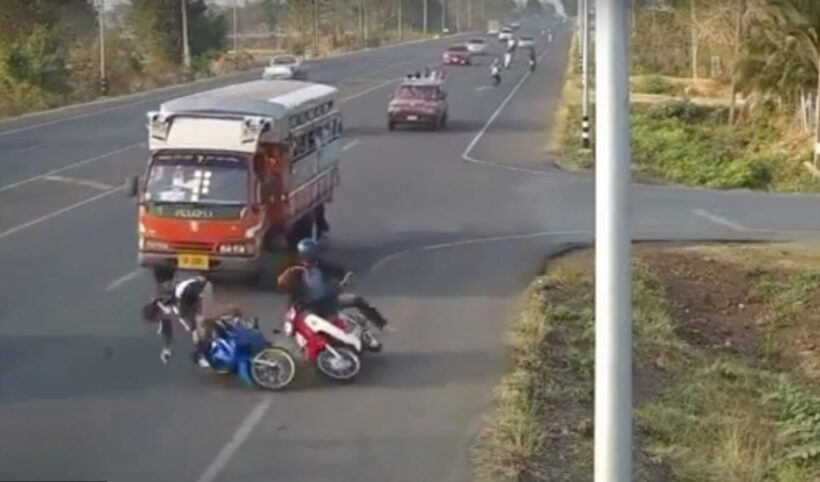 People die on Thai roads, at the scene of the accident, at a rate of 39 per day (average for 2018). This shameful and tragic toll was exceeded on Tuesday this week when 58 people lost their lives on Thai roads.

While this was the single worst day for road deaths this month, the figures are still unofficial and grow in the weeks that follow any road incident as all jurisdictions eventually send their reports in. Plus there are those who die in hospitals which aren’t taken into account in the reporting of road deaths. Then, of course, are the thousands who are maimed or injured each year who we rarely hear about.

Daily News has reported one of the worst cases which occurred last Tuesday involving a young lady who had just left the showroom on her shiny new Honda Zoomer-X.

The motorbike had only 2 kilometers on the clock when 19 year old Looksorn Bunchoo from Sisaket was involved in a collision.

When police arrived a pick-up was parked 40 metres away from the accident scene on the Rangsit to Nakorn Nayok road near the Piak Hua Pla Restaurant. Her head had been crushed under the wheel of the pick-up.

Her helmet was unused, still sitting under the seat of the bike. The ignition key was still in its plastic covering.

So far 8,901 people have died at the scene of accidents since the start of 2018. In August, so far, there have been 453 fatalities on Thai roads.

The Thaiger has chosen not to include the link of the graphic accident shown on the original story.