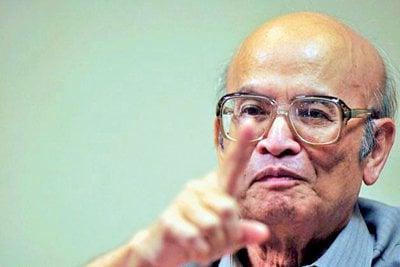 Call to revise lese majeste law
Phuket Gazette / The Nation
The head of the Truth and Reconciliation Commission of Thailand (TRCT), Kanit Na Nakorn, has called for amendments to be made to Thailand’s lese majeste law, which mandates prison terms for anyone found guilty of insulting the monarchy.

Mr Kanit said changes should be made to the law to prevent further social divisions.

Mr Kanit said certain elements were invoking Article 112 for self-serving reasons. At the same time, some have argued that Article 112 stifles their freedom of expression, he said.

“The TRCT has taken up the challenge of reviewing the lese majeste clause with the hope of bringing about reconciliation,” Mr Kanit said.

The TRCT was set up in July 2010 by former premier Abhisit Vejjajiva in the wake of protests by anti-government “red shirts” that left 92 people dead.

The mandate of the commission is to identify the causes of the conflict and take measures to promote long-term reconciliation in Thailand.

The TRCT did not support the abolishment of Article 112, saying that would be “inappropriate to Thai society,” Mr Kanit said.

However, the current situation was not sustainable, he said.

Analysts have noted that lese majeste charges, which can be filed by any member of the public, have soared in recent years as Thailand’s current political conflict has grown in intensity.

Instead, the TRCT is proposing that the royally-appointed Lord Chamberlain be able to decide whether such charges were warranted – or should be dropped.

The maximum punishment should also be reduced from 15 years to seven years, with the minimum sentence reduced to zero, the panel said.

Mr Kanit said he had forwarded the proposals to Prime Minister Yingluck Shinawatra for the government’s consideration.

Despite the recommendations of the TRCT, there remain powerful elements of Thai society that oppose any reform of the law.

“It is not appropriate to discuss this. Personally I will do my part for national security in protecting (the monarchy),” he told reporters.

Cambodia offers exchange for jailed political activists
Phuket Gazette / The Nation
Cambodia has refused a request by Thai Foreign Minister Surapong Tovichakchaikul for the early release of two high-profile Thai political activists, but has raised the unprecedented possibility of a prisoner exchange.

The pair are serving sentences of eight and six years respectively after being arrested for “spying and trespassing” in Cambodian territory in late 2010.

Mr Veera is a leader of the right-wing Thai Patriots Network group affiliated with the “yellow-shirt” People’s Alliance for Democracy, while Mrs Ratree is his assistant.

They were among seven Thais arrested in the border area during a period of high tensions between the two neighbors. The group, which also included seated Democrat MP Panich Vikitsreth, were allegedly in the area to inspect the ongoing border demarcation process.

The remaining five members of the group were released a few weeks later, following a one-day trial.

Last week, Cambodian Foreign Minister Hor Namhong told Mr Surapong that the pair would not be eligible for a pardon from the Cambodian King until they had served two-thirds of their sentences.

However, Hor Namhong said an early release could be considered in exchange for the release of Cambodians detained in Thailand.

Mr Surapong said he would ask concerned authorities to consider Cambodia’s offer. It was the first time the Cambodians had made such a proposal to Thailand, he added.

In contrast to widespread reports that Mr Khanchit and Mr Udon had argued publicly on many occasions, Mr Khanchit’s father Anek, a Democrat veteran, said he was not aware of his son having any political feuds.

Mr Khanchit was questioned by police for one hour before being released.

By law, an MP cannot be held on criminal charges while Parliament is in session unless MPs vote to revoke his or her immunity. A letter has been submitted requesting the House to revoke Mr Khanchit’s immunity.