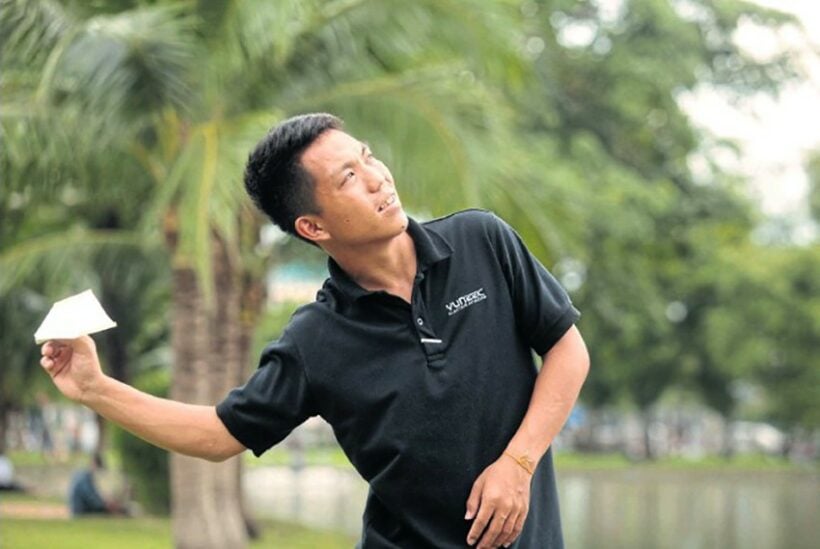 It was nine years ago when this young stateless boy was the media poster boy for a week with his story and dreams to represent his country in an international paper plane contest. In the wake of the granting of citizenship for four of the Mu Pa team, Mong Thongdee’s story didn’t end the same way and deserves our attention.

Mong Thongdee was born to a family of Myanmar migrant workers in Chiang Mai. He won Thai people’s hearts with his superb paper plane skills back in 2009. Mong Thongdee became Thailand’s champion at the age of 12 before going on to capture the third place at a paper plane contest in Chiba prefecture in Japan the same year.

But he had a dream beyond the trophies – Thai citizenship.

The story of Mong Thongdee reported in The Telegraph HERE.

Thai PBS reports that Mong was showered with praise and promises upon his triumphant return to Thailand. Politicians and bureaucrats lined up to ensure him that it was just a matter of time before he would get what he wanted.

It was the closest that Mong believed he got to realizing his dream. But as the governments came and went, Mong was quickly forgotten. And nine years on, from a little 12-year-old boy, Mong is now a grown-up adult and yet he is still waiting for the promise to be fulfilled.

Mong Thongdee’s story even has its own Wikipedia entry HERE.

In an interview with the Thai PBS recently, Mong recalled the attention and publicity he got upon his return from Japan in 2009 and how many of the “phuyai” came forth to promise Thai citizenship for him. Mong admitted that he was complacent and didn’t try to pursue the case himself, believing that all those “phuyai” would take care of it.

Under the Thai law, people classified as being stateless – mostly illegal immigrants and members of the various ethnic groups and their off-springs – are entitled to Thai citizenship if they can prove that they have done good deeds for the Thai society. Mong is just one of tens of thousands of people who were born in Thailand and classified as stateless. Without Thai citizenship they cannot travel freely, not entitled to health care service from the state, and are often denied education opportunities.

Disillusioned, Mong, with the encouragement of his teachers, decided to move ahead on his own to get what he believes he deserves. Mong said he sought letters of certification to prove his contributions to the country from Thai PBS, the Ministry of Science and Technology and the Department of National Parks, Wildlife and Plant Conservation. Mong said he has been helping train forest rangers on how to operate drones.

Thai PBS has issued a letter to certify that Mong has assisted with its training course in drone photography and in using drones to take aerial pictures for its drone competition programme. He is still waiting for certifications from the other two state agencies.

The stateless young man is currently training students of Ban Huay Sai school in Muang district of Chiang Mai on how to fold paper planes and how to fly them properly in preparation for the national paper plane competition at Impact Muang Thong Thani on August 28.

The interest in Mong has been revived by the recent “Wild Boars” soccer team rescue operation. Three of the young footballers and their coach faced the same plight as Mong but were eventually granted Thai citizenship last week.

Mong congratulated the Wild Boars footballers and noted that his case is more complicated. Mong was born in Thailand to parents who are migrant workers from Myanmar while the Wild Boars boys and their coach were children of ethnic hilltribe people living in Thailand.

As Mong’s hope was rekindled, good news finally came last week when was informed by the Local Administration Department that he was to receive his Thai citizenship soon. He was told that his case is now in the hands of the Interior Ministry which is awaiting a reference letter from the Ministry of Science and Technology confirming his contribution that has brought fame to the country.

After nine years of empty promises, Mong can only hope that this is not going to be another disappointment. More rain and flood warnings for the north and north-east