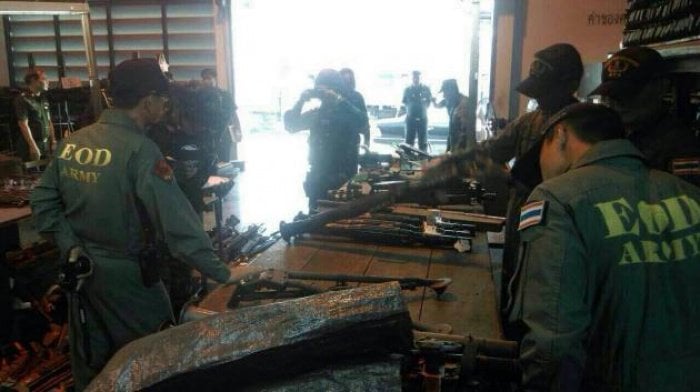 PHUKET: Five civilian personnel were injured yesterday in an accident at the Army’s Ordnance Department in Kiakkai in Bangkok during routine maintenance and inspection of anti-tank rocket-propelled grenades and launchers, a deputy Army spokesman said.

Col Sirijan Nga-thong said five ordnance personnel were injured and that no civilians or residents living nearby were affected.

Initial news reports said the explosion occurred with an electrical transformer and that nine people were injured.

Department commander Lt Gen Tharee Wuthiphanich, speaking to reporters at the scene, said the incident was not an explosion but a burst of pressure triggered during maintenance work on an RPG launcher. A part of the launcher had popped out and hit a person on the head causing a cut that required six stitches, while four others suffered ringing ears from the loud bang.

The five personnel were taken to hospital but suffered no serious injuries, he said.

It was the second such incident in recent years, following an explosion in April 2013 during maintenance of M-72 anti-tank rockets by staff at an infantry battalion located in the same compound resulted in a rocket exploding, which seriously injured two soldiers and slightly hurt six others.

Army spokesman Col Winthai Suvari later gave further details of injuries – one of the four men who suffered ringing in the ears also sustained a cut and required stitches to his body, while the three others sustained a hit from the pressure, causing them body discomfort.

Defence Minister Prawit Wongsuwan later said there were nine people injured, and that the incident was an accident. The department has been instructed to follow safety regulations, more strictly, as “accidents occur regularly”.

The largest explosion at this compound took place on November 16, 1980, when 4,800 rockets went off, killing 38 people while wounding 350 others and causing heavy property damage from tremors and shockwaves over an area spread over a 3km radius.

Other major explosions and incidents involving the Army’s Ordnance Department:

October 25, 2001: A total of 29,370 items of unspecified explosive went off in a chain reaction during an operation at an armory in Nakhon Ratchasima to dispose of bombs due to expire. Nine people were killed, 94 wounded and 8 remain unaccounted for.

January 25, 2012: Explosions occurred at an armory in Nakhon Sawan, causing no casualties.

September 13, 2013: A chemical leak occurred at a storage facility located in Ayutthaya after heavy rain, which caused the foundation of one tank to collapse, resulting in the leak. No one was injured.

May 14, 2014: Two explosions occurred at an armory in an ordnance department compound in Nakhon Ratchasima’s Pak Chong district, causing huge noise but no injuries. This depot was relocated to a remote area in Si Khiew district.