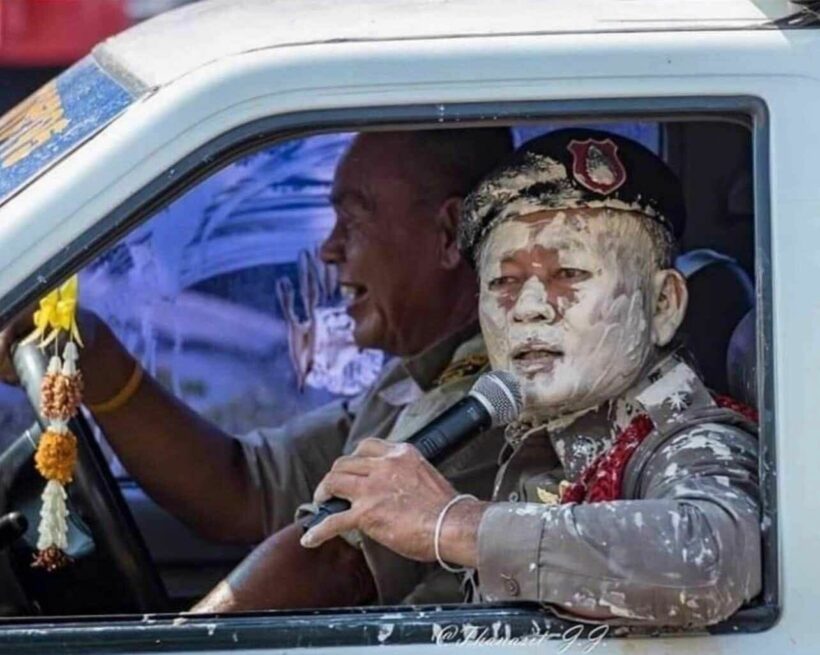 We warned you, but we can’t stop you. That’s the message being conveyed by the actions of Thai authorities, who have shown restraint toward prohibited water splashing on Khao San Road in Bangkok during this week’s Songkran festival. Police, and even soldiers, have been called in to remind tourists and Songkran revellers about the government’s ban on water splashing this year. Water pistols have been confiscated but there has been no arrests.

The same situation has been happening in other tourist hotspots around Thailand to a greater or lesser extent.

Despite repeated warnings about the government’s ban on water splashing, setting up screening checkpoints at both ends of Khao San road and deploying the Thai military, they haven’t taken any heavy-handed steps to arrest or fine the Songkran partygoers, notably foreign tourists, from splashing water on the street during the Thai New Year.

In fact, at least one unfortunate police officer got his face smeared by revellers while patrolling Khao San Road yesterday. The picture shows the besplattered officer speaking into a microphone out window of a police vehicle, while his partner in the driver’s seat laughs in good jest. Addressing the situation on Thursday, government spokesman Thanakorn Wangboonkongchana said…

“The government and the CCSA would like to ask for the full cooperation of locals and tourists, instead of strictly enforcing the ban, as we don’t want to ruin the festive spirit. [Over the weekend] we hope to not see anyone splashing water along Khao San Road and any other public spaces.”

Videos posted on YouTube and Thai media showed revellers — both foreign and Thai — shooting water guns and splashing water, many of them not wearing masks or social distancing, apparently in defiant disregard for the government’s killjoy ban on the beloved activity.

In response, the BMA has convened an emergency meeting to address the large number of tourists and local Thais who have been engaging in water fights on Khao San Road, according to city clerk Khachit Chatchawanit. He said that the BMA has agreed to bolster patrol efforts in the area and enforce the ban on alcoholic sales after 11pm.

“More than 70 BMA and police officers will be deployed on Khao San Road to improve understanding among visitors about the water splashing ban in the area. In fact, the area isn’t even allowed to host Songkran celebrations.”

Moreover, police are setting up 8 new checkpoints along Khao San Road to prevent revellers from smuggling in squirt guns and other water splashing paraphernalia, and have instructed area businesses not to sell such items, the Bangkok Post reported.

On Wednesday, policed fined 8 Khao San Road bars for selling alcoholic beverages after 11pm, according to Chana Songkhram police superintendent Pol Col Sanong Saengmani. He said that police won’t start enforcing the water splashing ban under the assumption that many tourists are unaware of it, possibly because the news about the ban wasn’t spread widely enough.

The superintendent noted that currently, only 10 Buddhist temples in Bangkok and the Asiatique outdoor mall along the riverside are permitted to hold traditional “water sprinkling” activities, having applied in advance to host the events under strict Covid-19 prevention measures from 5pm to 10pm during the Songkran holiday.

Meanwhile, the government’s handling of the Khao San Road water fights, in which foreign tourists are seen as the primary offenders, has revealled a double standard in their treatment of law breakers. On Wednesday, Bangkok police deployed two water cannons to the Democracy Monument to dispel Thai youths who were holding water fights in defiance of the unpopular water splashing ban. Apparently, you can fight water with water. You just need to bring the bigger gun.

But the government’s actions on Khao San Road speak louder than their words, and the water fighting fun is likely to continue on, despite the incessant hand slapping and telling tourists not to snatch cookies from the cookie jar.

Ramanathan.P
"We warn you. But we cannot control you. So we are with you. Appreciate your co-operation"......Thank you officer. We will abide by your instructions and thanks for your understanding......ha...ha...ha....
JJJ
I’m shocked, shocked to find bars … ermmmm … restaurants selling alcohol after 11pm.