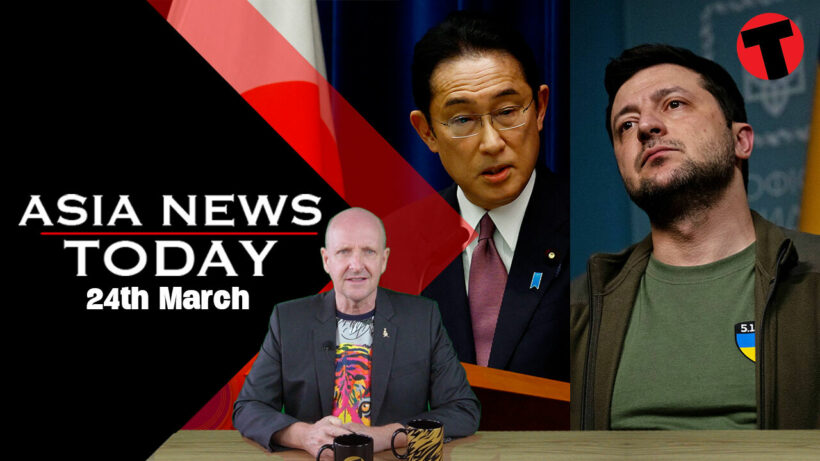 Search and rescue teams in the southern region of Wuzhou, China, have located one of two black boxes from the China Eastern flight that nosedived into remote hills on Monday. Zhu Tao, the director of the aviation safety office at the Civil Aviation Administration of China, says the black box found yesterday is likely the cockpit voice recorder. The China Eastern Airlines Boeing 737-800, carrying 132 passengers and crew nose-dived into remote local hills from its cruising altitude mid-Monday afternoon. Commercial passenger places carry two black box recorders… one that captures flight data, and another that records cockpit communications, including conversations with air traffic controllers. The box has now been shipped to a professional civil aviation agency in Beijing for data analysis. Officials noted that the box’s technical recording unit appeared fairly intact, although the exterior box was severely damaged.
——

Ukrainian President Zelenskyy has delivered an online speech directed at Japanese lawmakers, raising the potential horror of the nuclear disaster in his country…. Alluding to key moments in Japan’s modern history back in 1945. While he praised Japan as a “leader” in Asia for its response to the Russian invasion, he urged the Japanese government to continue to do so. As the only country ever to be attacked with nuclear weapons, the bombings of Hiroshima and Nagasaki are a potent symbol in the Japanese consciousness. Zelenskyy mentioned the potential threat, saying that the world was watching and wondering what would happen if Russia were to use nuclear weapons. He also echoed concerns expressed by US President Joe Biden who last week warned that there have been “clear” signs that Russia is considering using chemical and biological weapons. Speaking after the televised speech, Japanese PM Fumio Kishida, said Japan would consider additional sanctions against Russia and fresh humanitarian assistance to Ukraine.
——
Indonesia has been hit hard by an increase in cooking oil prices and rare shortages of cooking and palm oils used for cooking in just about every Indonesian household. Many Indonesians are now complaining that the prices are now out of reach for the majority of the country’s 270 million population. In recent weeks, local media have been showing images of people queuing to buy cooking oils as well as empty shelves at supermarkets, such that Indonesia President Joko Widodo has now been forced to step in. The shortage is an irony since Indonesia is the world’s biggest producer of crude palm oil which is the main ingredient in many oil-based products, including cooking oils. The cooking oil scarcity is also affecting street food vendors and restaurants across Indonesia, many of who have already been forced to close because of the shortage or highly inflated prices.
—–
Thailand is now working closely with neighbouring authorities in Malaysia to reopen all land borders by May 1. There are many such land borders between the two countries, principally in the south of Narathiwat, Yala and Satun in Thailand… and Perlis, Kedah, Perak and Kelantan in Malaysia. Thailand’s Tourism and Sports Minister says that Thailand would have to get clearance and permission from the country’s Covid authorities to reopen more entry points between the two countries. At present, the Sadao Customs, Immigration and Quarantine border crossing in Songkhla is the only entrance open for travellers entering the kingdom of Thailand from Malaysia. Malaysian tourists have been one of the most popular visitors to Thailand before the closure of land borders back in 2020. Some 10 percent of visitors to Thailand, pre-Covid, were from Malaysia.
——
Whilst Covid, and specifically the Omicron wave, has passed its peak in much of Asia, more than 10 million people in South Korea have now been infected with the highly infectious Omicron variant. The number of Covid-related deaths has almost doubled since early February, leaving funeral homes and crematoriums unable to cope. The Korean Disease Control Agency reported 490,881 cases one Tuesday, the second highest daily tally after it peaked at 621,205 on 16 March. Yesterday there were 395,000 new Covid infections reported. South Korea reacted to the world’s initial outbreak with a strict regime of tracing and quarantine, but now with 87% of its population fully vaccinated, most of the testing has been scrapped by the government, along with social distancing curbs. Ministers have also instructed the country’s 60 crematoriums to stay open for longer and burn seven bodies a day, instead of the previous five. The country’s 1,136 funeral homes have also been instructed to expand their facilities to cope.
——-
Vietnamese airline Bamboo Airways is launching its first flights from the UK with weekly service from Heathrow to Hanoi. The carrier first took off from Heathrow yesterday as part of its plans to expand its international services across Europe and other parts of the world. The Heathrow-Hanoi route will then operate year-round every Sunday. The airline uses a Boeing 787 Dreamliner for its UK flights, with both economy and business class. The CEO of Bamboo Airways says their goal is to expand across Europe, the US, Australia, and Asia, eventually with around 40 international routes in place. Vietnam currently requires all travellers, regardless of their Covid vaccination status, to provide proof of a negative test taken within 72 hours of departure for PCR tests or within 24 hours for an ATK test.
——
And kudos to this guy who decided to paddle his way from Phuket to India across the Bay of Bengal, to meet up with his wife he said he couldn’t see for the past 2 years. The Vietnamese man says he wasn’t able to get a visa out of Vietnam to visit her, so he somehow made his way to Phuket, bought a 2 metre inflatable boat and started paddling towards India’s east coast… complete with 20 packets of instant noodles. But Thai marine authorities heard about his plans and intercepted him, taking him back to Thailand. The man had been at sea for 18 days but only reached around 80 kilometres of the 2,000 kilometre journey. Not sure if his Indian wife was waiting on the other side… she may have to wait a bit longer now.

AlexPTY
you forgot to mention North Korea, not they mastered social media and more dangerous than ever: It's Always Sunny in Pyongyang: NK Confirms Biggest-Ever ICBM Launch With Amazing Clip! US not impressed, slaps on more sanctions.. NK Sunny.mp4