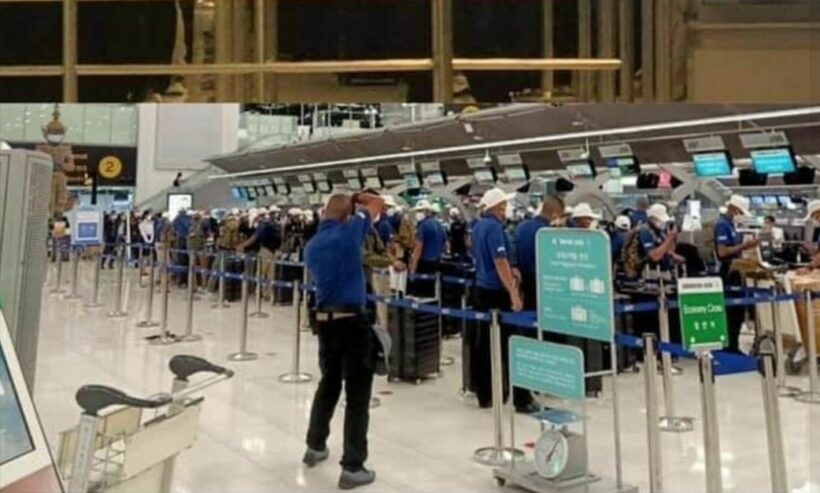 Following rumours spread on social media saying Thai soldiers travelling to the US for Pfizer Covid-19 vaccines when they were actually going overseas for parachute training, the Royal Thai Army filed a defamation complaint against 9 people who allegedly spread the so-called “fake news.”

A representative from the army filed a complaint with the Nang Loeng police station yesterday on chief Gen Narongpan Jittkaewtae’s behalf. 8 of the people named in the complaint face charges for posts made on Facebook while the other used Twitter, a source told the Bangkok Post, adding that more people will also face charges.

Under Thai law, defamation carries a punishment of up to 2 years in jail and an up to 200,000 baht fine. Thai authorities recently said they are cracking down on fake news spread on social media, especially when it relates to the Covid-19 situation.

The Digital Economy and Society Ministry’s Anti-Fake News Centre reported more than 50 cases of fake news posted over the past month, with most related to the coronavirus or vaccines. Those who posted or shared misleading information found to threaten national security or cause public panic could be punished under Thailand’s Computer Crime Act which carries a maximum penalty of 5 years in prison and an up to 100,000 baht fine.

Recently, a photo of Thai soldiers at the airport, preparing for a flight to the US, was widely spread on social media, with many posts claiming the soldiers were travelling overseas for vaccinations and using tax money to fund the trip. The 114 Thai soldiers were actually headed to the States for a strategic airborne operation exercise at Fort Bragg in North Carolina. The troops had received AstraZeneca and Sinovac vaccines in Thailand and the trip was paid for by the US, according to the deputy army spokesperson.

Bluesofa
1 hour ago, Dedinbed said: What do you call parachute jumping when the parachute doesn't work .? Jumping to a conclusion ..  New recruit: Do these parachutes fail very often? Sergeant: Only once.
Paco
What about the government that spread fake news, they in the clear

AussieBob
18 hours ago, Objectivance said: Who in their right mind, would use any legitimate credentials on either of those godforsaken websites? At any rate, neither of them require any such thing. Unless it's a regional thing, which still would be…
HolyCowCm
19 hours ago, Guevara said: The average IQ of the Thai Army suggests they just might parachute from a sub. Now that has to be fake news when they have a higher dust collecting aircraft carrier with no aircraft..
HolyCowCm
But as it looks, things are seriously heating up and little superficial egos are easily hurt when one has the little man complex craving everyone to see how big their boots are. And in the end their boots are huge…