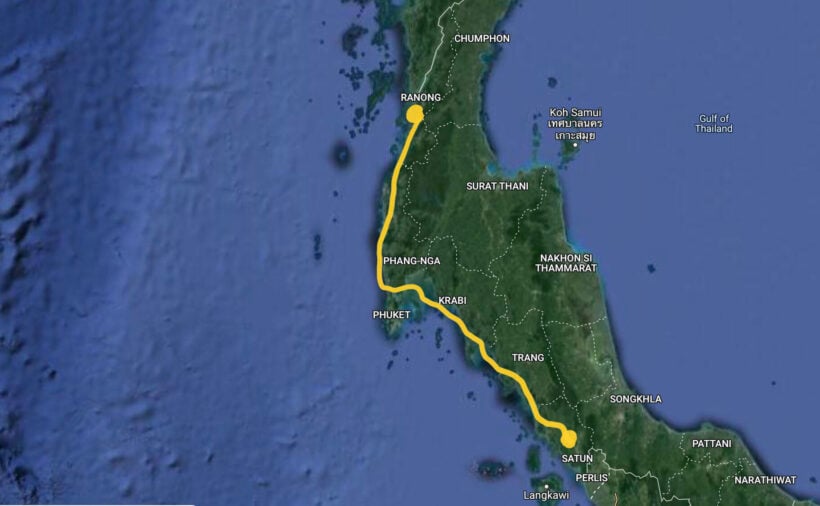 photo of an elevated coastal road in Australia via Wikipedia

CORRECTION: An earlier report incorrectly stated the cost of the road. The proposed budget for the design is 80 million baht and the total cost for construction has not been determined.

A “Thai Riviera” road is being planned to be built along the coast six of Thailand’s Andaman provinces, if the Office of Transport’s request for 80 million baht for the design gets approved. Beginning in Ranong, the road will run through Phang Nga, Phuket, Krabi, Trang and end in Satun province. The road is part of PM Prayut Chan-o-cha’s plan to boost the economy and tourism in southern Thailand.

If the budget gets approved, the Office of Transport will spend the next two years making a development plan, which will be presented to the Transport Ministry for approval sometime after May 2024.

Prayut invited the Transport Ministry to look into the feasibility of the coastal road in October last year. The plan must consider the road’s impacts on the economy and environment. Engineering, project value, managing land ownership and local opinions must also be taken into consideration.

The OTP will study foreign examples of coastal roads, some of which are elevated in areas unsuitable for ground construction.

BigHewer
Highway 4 basically follows the Andaman Coast as it is, though is a fair distance inland in a few sections. I see in the article they are talking about an elevated road and areas “unsuitable” for construction. Seems like a…
DWiener
Cue another half finished project with bridges to nowhere crumbling into the sea. The money would be better spent *finishing* the several existing roadworks up and down that coast 🙄

palooka
Un oh someone went to Southern California or has been watch too many movies. Highway 5 California in Thailand and billions in housing and real estate popped into their little minds, just build the road and dreams will come true. …

Noble_Design
Done right it could work... just like how it was done in Chanthaburi:
oldschooler
Not Phuket: already has an Andaman Coast Road which “ dead ends” at Rawai ……starts at Sarisin Bridge . There isn’t any room or need for another !