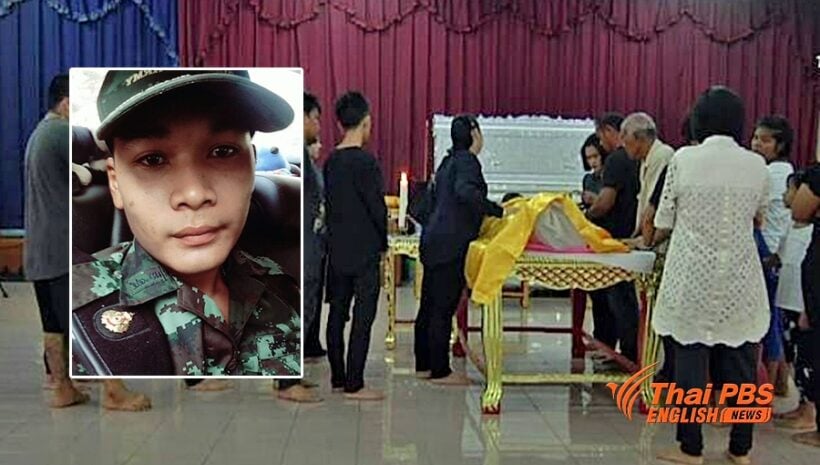 A complaint has been lodged with Surat Thani police by the mother of a conscript who suspects her son was a victim of a beating at the 45th Military Circle based in Vibhavadi Rangsit Military Camp.

The mother of 21 year old Private Noppadol, Mrs Malaiporn Worakitpan has told police that her son was brought home by two conscripts on Saturday.

He said he was feeling ‘very exhausted’, went to his bedroom but was later found lying unconscious with blood leaking out of his nose and mouth.

Private Noppadol, known to his friends as Taro, was pronounced dead when he arrived at the local hospital. His family asked the doctors to conduct an autopsy to determine the cause of his death.

Maj Gen Wichai Tassanamontein, head of the 45th Military Circle, says the military cooperate fully with the civil police investigation. He says the military will hand over video from any surveillance cameras installed at the barracks. The corporal in charge at the Military Camp has denied any physical abuse of conscripts under his watch.

The mother has told police that the two conscripts claim that 60 conscripts faced corporal punishment at the barracks. The autopsy report showed that his heart and spleen were fractured and there were blood leaks in the chest and lungs. The report says that the organs appeared to have been crushed.

Pol Col Wichob Kerdkliang says the two conscripts who brought Noppadol home from the barracks would also be questioned.

Just three months ago Private Yutthakinan Boonniam was allegedly beaten to death whilst in custody at the 45th Military Circle prison. Eleven army officers were later charged in military court. The case is still waiting to be heard.

New traffic tickets, now in both Thai and English