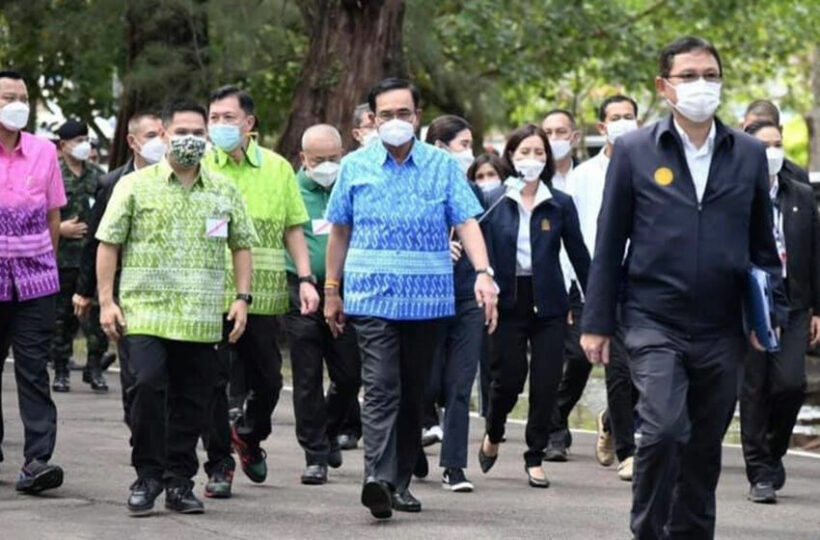 A number of activists opposing the visit of PM Prayut Chan-o-cha to the southern province of Krabi were detained by police yesterday. Thai PBS World reports that the 5 activists rallied at the province’s Ao Nang beach to protest a visit by the Thai leader. The PM and members of his administration were in Krabi for a mobile Cabinet meeting and to formally declare natural attractions at Ao Nang beach open for tourism.

The 5 activists greeted the PM and his entourage by holding up banners displaying messages such as, “Murderous government”, “Krabi people do not want Prayuth”, and “Krabi is dying”. The 5 were taken into police custody at Ao Nang station, where they were questioned and released about 2 hours later.

The small protest follows reports of vandalism of several posters and banners that had been erected to welcome the PM and his ministers to Krabi. The billboards had been hung in the Muang district of Krabi, but many were subsequently slashed and torn. The police say they’ve launched an investigation to uncover who was responsible. Local authorities also had to remove several banners critical of the government which had been erected ahead of the PM’s visit.

In addition to those who came out to oppose the Thai leader’s visit, a number of the PM’s followers were also in attendance. Several supporters welcomed him to the province and told him they oppose any attempts to abolish the country’s lèse majesté law. The controversial law, also known as Section 112 of the Criminal Code, has been in the headlines both here and internationally as pro-democracy activists campaign for it to be repealed.

bb54
Those are very unflattering baggy shirts being worn by the usually image concious officials, the shirts look large enough to hide something like a Kevlar waistcoat
harry1
no doubt the 5 activist are concern why the present government want to go ahead with fossil energy in Krabi expressing their view is a vital rights written in the constitution ? but ignored by the powers that be,yet the…