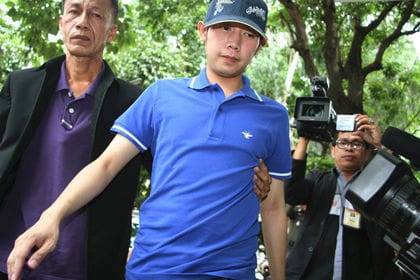 The disappearance of difficult-to-find Vorayuth “Boss” Yoovidhya is not a simple police conspiracy to ‘protect’ the hi-so heir to the Red Bull fortune. There is a complex web of strategies by the Yoovidhya family to make sure he is difficult to track down – not just Boss but the whole family, and their money.

The Bangkok billionaire family responsible for co-founding Red Bull, the sugary energy drink and world top-seller, uses offshore companies to hide the purchase of their jets and luxury properties. This includes the family’s fancy London digs where  Boss was last seen, and photographed, by an Associated Press reporter.

But, to be clear, the family are not doing anything illegal. Moving assets offshore plus some clever accounting can operate entirely within the law, an indication of how easily the biggest players can move their fortunes around and, usually legally, avoid paying a lot of tax and keeping their whereabouts secret.

In the case of the Yoovidhya clan, their confidential world network of financial dealings came to light as the media and officials started to track down the fugitive son. He remains on the run after failing to show up to Court to answer charges relating to a hit and run back in 2012 when the Ferrari he was driving hit a traffic policemen, killing him instantly, dragging the body along the road and then driving home rather than reporting the incident to police.

Hundreds of Instagram and Facebook postings led The Associated Press reporter to the Yoovidhyas’ London vacation home. They seemed to be able to do what the Thai Police couldn’t – locate the fugitive. Since then, Thai authorities have revoked his passport and issued an arrest warrant, but claim they currently have no idea where he is. Just two weeks ago the final paperwork to submit the arrest warrant through Interpol was stalled when the ‘address’ section of the paperwork was missing. This followed a comedy of errors when it took four months to translate the Thai warrant into English.

The investigation into Vorayuth’s location also, inadvertently, led to the Panama Papers, a collection of 11 million secret financial documents showing how the world’s wealthiest families hide their money and shuffle it around through a web of slick paperwork and skilled international accountanting. The Yoovidhya family’s financial arrangements were exposed in the Panama Papers when they were leaked by the German newspaper Sudeutsche Zeitung. The powerful and wealthy in 70 countries were exposed as journalists started sifting through the fine print of the documents.

The Yoovidhya family’s network of offshore companies, set up by Mossack Fonseca (a ‘leading global provider for legal and trust services’ according to their Google listing), was so intricate that, until now, they’ve managed to keep the family name and Red Bull brand out of the spotlight

We now know that the Yoovidhya family has at least six offshore, anonymous companies. Their assets have been heading offshore to tax havens for up to 20 years. Again, none of this is illegal and is ubiquitous for the wealthy around the world to use shell companies and tax havens to keep the tax man, governments, police and prying journalists at bay.

Since 2012, Vorayuth “Boss” Yoovidhya has repeatedly failed to show up when ordered to face criminal charges of speeding, hit-and-run, and reckless driving causing death. Thai, world media, and local social media, have not been lenient on the 32 year old Red Bull heir. The common theme is that wealth and fame can buy your freedom in Thailand and that the police have either been incompetent or colluded with his inability to turn up to Court hearings.

The last time Boss was seen was in April at his London home, tracked down by a reporter with no more than a laptop, Facebook and some persistence. The AP reporter also showed that, in the years since the fatal accident, Boss had been travelling the world in the family’s private jets, going to Red Bull events and enjoying the high-life in the world’s most expensive cities and holiday locations.

Even if Vorayuth “Boss” Yoovidhya never returns to Thailand to answer the charges against him, the legacy of this case is a general outcry from ordinary Thai people that the rich and famous need to be treated just the same as everyone else – for a change. The media has also exposed the investigating police officers to ridicule where a sole reporter and a few days work was able to do something the entire Royal Thai Police force couldn’t.

New traffic tickets, now in both Thai and English