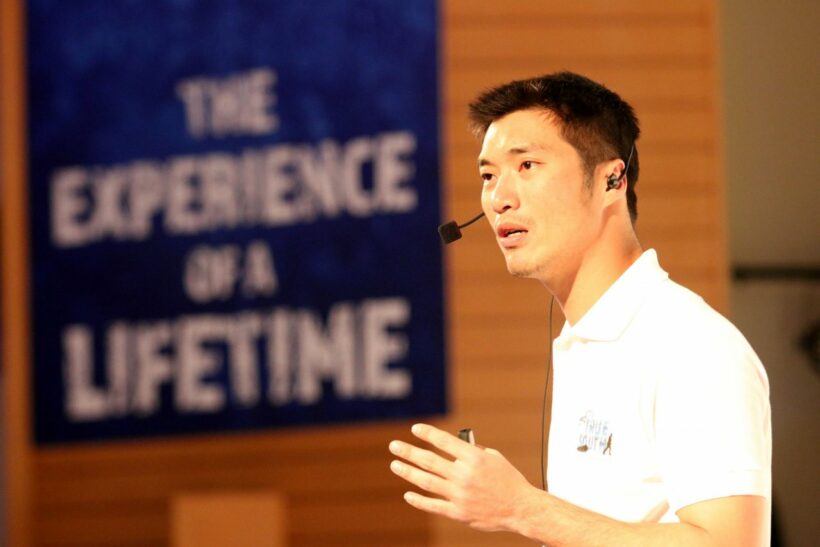 With a promise of inclusive democracy to resurrect politics from its “lost decade”, the young-blood Future Forward Party was launched yesterday.

Thanathorn Juangroongruangkit, a scion of the Thai Summit business family, and law academic Piyabutr Saengkanokkul yesterday launched the party at a “Drinking Coffee with Thanathorn and Friends” event, ostensibly named to circumvent the junta’s ban on political gatherings of five or more people.

They also submitted their application for registration of the new party to the Election Commission after the introductory event. Thanathorn, Piyabutr and 24 others hailing from a cross-section of society co-founded the party with the aim of restoring faith in participatory democracy after Thailand has been bogged down in more than a decade of political crises and coups.

Promoting human rights as their key theme, they said they would not follow the patterns of old-fashioned politics with military people as key players and military-designed mechanisms. The party, after contesting in the next general election, will have to engage in the parliamentary process stipulated in the junta-written 2017 charter, which provides for a junta-handpicked Upper House and complex voting systems that will pose stiff challenges for contesting parties.

Thanathorn pledged that the party’s MPs would not take part in the “undemocratic” process of selecting an “outsider PM” with appointed senators.

Thanathorn and Piyabutr said they did not want to defy the junta’s political ban, but did not elaborate on their political plans for the upcoming election, now scheduled for February next year. The 39-year-old tycoon said he did not agree with the ban and called for it to be lifted to allow all parties to get started and reach out to people during the pre-election period.

Hyped in social media as a “new hope”, the party is made up mostly of members from progressive backgrounds. Thanathorn was once a student activist who joined protests with grassroots people before turning into the tech-savvy vice executive chairman of Thai Summit Group.

Piyabutr was well known as a member of the academic group Nitirat that has opposed Article 112 of the Criminal Code banning lese majeste, which the group believes has been misused with political motives. Piyabutr said his stance on Article 112 remained the same but it did not mean it would be co-opted in the agenda of Future Forward Party.

“Democracy is the key theme of our party. Any policy will have to be based on consensus,” he said.

Other members of the party include the former director of Amnesty Thailand, Chamnan Chanruang; education academic Kunthida Rungruengkiat; disabilities rights activist Nalatporn Krairerk; and print labour union president Surin Khamsuk. They said they were unable to announce their policies yet due to the junta’s ban, but added that the focus would be on the lost benefits of social minorities and disadvantaged people.

“I wish that people of all sexes, genders and ideologies can be viewed equally as humans,” said Nalatporn.

“Disabilities might have been seen as burden but I believe we can push for more beneficial policies through a party system.” Meanwhile, Democrat Party leader Abhisit Vejjajiva said new parties like Thanathorn’s would force his own party to work harder in responding to the people’s needs. Pavin Chachavalpongpun, an exiled professor and prominent junta critic, described Thanathorn as “a breath of fresh air”. 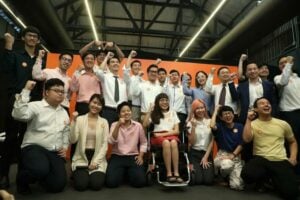 The two words that will cause problems for ‘Future Forward’ are ‘future’ and ‘forward’ – taking Thailand into its future as a citizen of the world and being ‘forward’ thinking are not ideologies that fit well with the old guard, Bangkok’s elite or the military. Whilst we haven’t seen all the Future Forward polices mapped out as yet, due to the ban on political meetings, we did get to meet many of Future Forward’s team ‘over coffee’ yesterday (must have been a very busy barista).

Apart from the 39 year old car-parts billionaire pin-up boy there’s a lot of forward-thinking academics lining up behind Thanathorn to give his fledgling party depth and width. Law students, professional protestors, legal advisors, journalist-specialising-in-disability-issues, an expert in Finland’s education system, a LGBT activists – no doubt worthy, interested, motivated people but perhaps a bit green going up against seasoned politicians. Or the Thai military machine which represents Thailand’s ‘old ways’ and all the things Future Forward want to change.

It’s going to be an interesting run up to next February’s election.