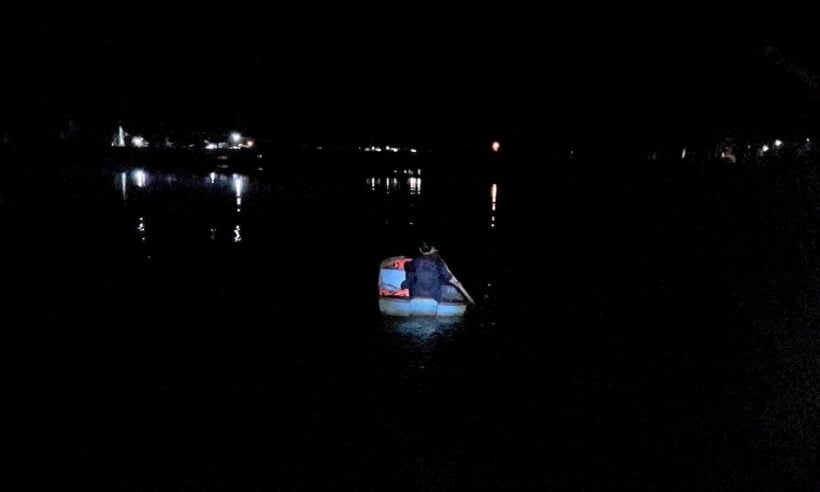 This afternoon (August 31), the croc-hunting team corralled for the search failed to capture the rascally reptile. The team includes Fisheries Officers, crocodile catchers from Surat Thani and experienced staff from Phuket Crocodile World. The team brought 4 rafts to chase the crocodile to where the nets were placed. However, the team failed as the crocodile dived 8-9 meters deep in the lake. The size and depth at the middle of the lake also makes it impossible to use other methods, such as shooting an anaesthetic or using a low-volt electric shock.

“We’ve tried since last night but the crocodile is very fast. We have officers blocking it into a specific spot while we continue to discuss about plans to catch it. It is already a good sign that it has been found in the lake and not in the sea, making our job a little bit easier,” said Phuket Governor, Noraphat Plodthong.

The Head of Phuket’s Fisheries Office, Paiboon Bunlipatanon, added that the team is rushing to catch the crocodile and has a number of plans to find and capture the reptile.

“Using a lariat didn’t work as it was too fast and using the trawling net didn’t work because the lake is too deep and the crocodile could escape to the deeper water that the trawl couldn’t reach,” Head of Phuket Fisheries Office explained.

“Our best shot now is to catch it with a net when it comes near the bank where the water isn’t so deep. If this doesn’t work, we will use a big hook with bait. If the crocodile gets close enough to the bank and the trawl method doesn’t work, we may use anesthetic or low-volt electric shock.

“I would like to tell people not to be worried as we have a team stationed there and blocking the crocodile 24/7 and tonight, we will apply all these tactics, depending on the situation.”