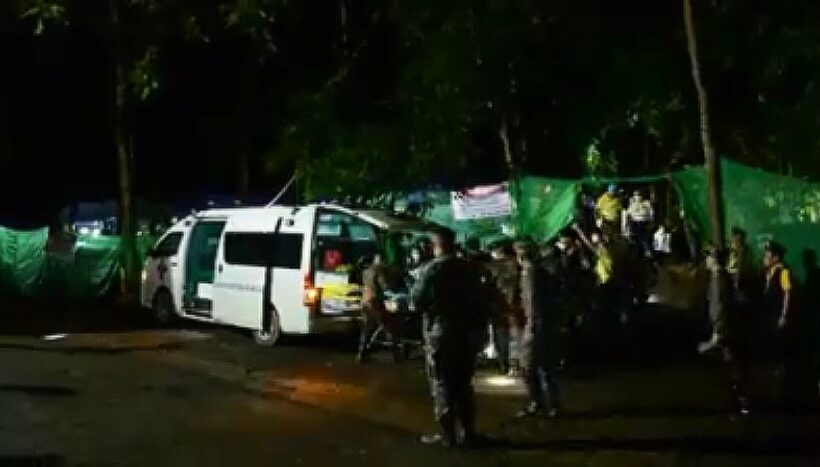 Divers have been preparing over the past 12 hours to resume their extraction of the remaining 9 people still inside the cave. They re-entered the cave mouth at 11am this morning. On this basis, comparing to yesterday’s timing, we can expect more of the team to emerge from the caves early this evening, but that is pure speculation.

A drone has also been found, not part of the operation, near the helicopter landing area. It has been confiscated pending further investigation.

There has been a further media clamp-down on the flow of information as authorities try and control the latest developments. Police have restricted the movement of media following some Thai media trying to chase ambulances and tracking helicopters as members of the football team were evacuated yesterday. Media frequencies have now been jammed. Police say the speculation about six people being evacuated last night emerged from a leaking of information by an unauthorised officer.

They’ve also warned rescue teams and police to restrict information being sent to the media before it has been shared through official channels – the press briefings with the former Governor Chiang Rai, Narongsak Osottanakorn, who is now the Governor of Phayao.

The Thai PM, Prayut Chan-o-cha is scheduled to visit the cave site at 5pm today. It is not know where he will be travelling – around the entrance of the Tham Luang caves or if he will go to the hospital – again, the media are now being kept in the dark about these arrangements. Media have also been informed that they will not be allowed to follow the PM during his visit to Chiang Rai.

The weather in Chiang Rai has been drizzling but no particularly heavy rain that will hamper another attempt at rescue. But more rain is predicted in coming days.