“We all think that it’s something that won’t happen to us, I thought that was too until now when this happened in my own home. How can a snake this size be in the toilet? Let me tell you what happened to Anna, my mother. She went to use the toilet as usual. Our home is a village, not in the forest or the middle of nowhere. The snake bit my mother as she sat on the toilet.”

It seems that neither party gave up until both were bleeding and needed to head to hospital (or the vet). The incident was shared by the woman’s daughter on Facebook ‘Chunya Sittiwichai’ . The daughter posted the photos to prove that it wasn’t “a plot from a horror film”.

“My mother grabbed its head and tried to pull it off her body. Well, the snake just wouldnt let go. It started to wrap itself around my mother squeezing in tighter and tighter.”

“My mother tried to grab the head but it just wouldnt let go and her wound started to get larger. It was if she was stabbed. She screamed to my brother, well he was scared of the snake and handed my mom a cutter.”

My mom used the cutter on the snake but the skin was so rough that she accidentally cut her self about 3 centimeters deep. My mom almost lost it while the snake continued squeezing. This is when my mother thought of my grandmother for help.”

“I don’t know how but my mother finally got the snake to stop biting her. She pushed the head on the floor and screamed for my brother to get a hammer. After some hitting the snake finally stopped squeezing. My brother pulled her out of the toilet and locked the snake inside.

A local volunteer rescue team came to retrieve the snake. The father took the mother to the hospital. She received stitches from the snake bite and self-inflicted wounds from the cutter.

“My mom is so brave, I would have fainted in the toilet. I learned to always look at the toilet before using it even if it seems impossible for a snake to be inside.” 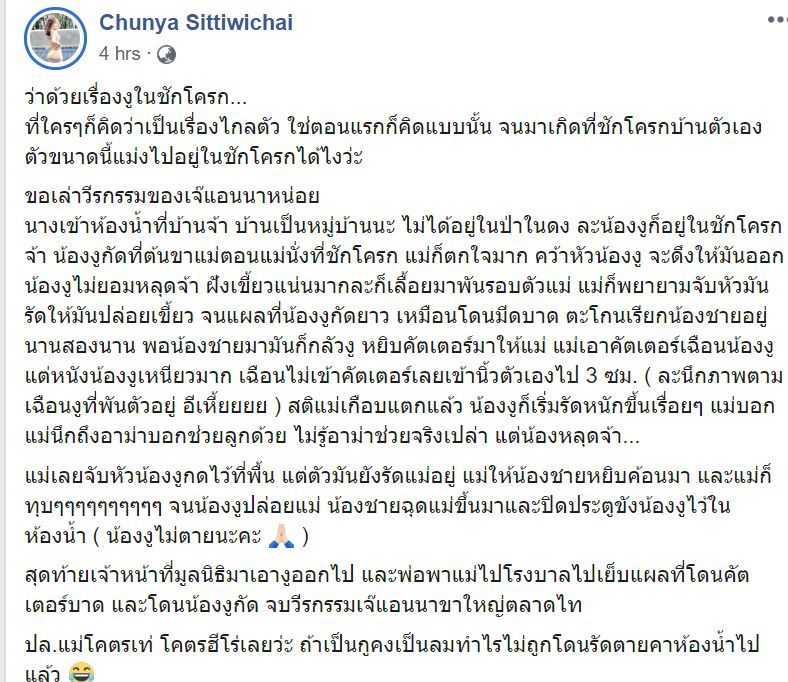