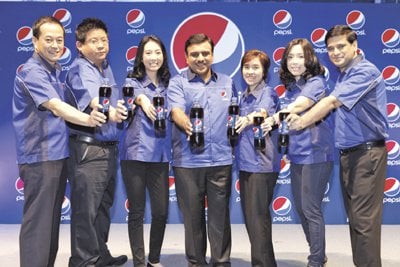 PHUKET: Super Cheap Co Ltd has taken over distribution of Pepsi beverage products in Phuket and two other key Andaman coastal provinces, a spokesperson from the local retail giant has confirmed.

The development follows the expiration on November 1 of a long-running contract between the Thai subsidiary of Pepsi-Cola (PepsiCo) and local beverage firm Serm Suk.

Prior to the split, Bangkok-based Serm Suk ran bottling and distribution of Pepsi beverages in the Kingdom for nearly six decades.

However, PepsiCo recently sold its majority stake in Serm Suk to Thailand’s largest brewer and distiller, Thai Beverage Pcl, in a deal reportedly worth in excess of 15 billion baht.

“The amount of Pepsi drinks in Phuket will be the same as before. The only thing that has changed is the distributor – from Serm Suk to Super Cheap,” she said.

However, consumers will have noticed that Pepsi is no longer available in glass bottles as has been the norm at restaurants and eateries across the Kingdom for decades.

In the absence of Pepsi, Coca-cola will look to continue its strong hold on the returnable glass bottle market, which now faces competition from the recently launched “est” brand, Serm Suk’s new carbonated cola drink.

Claiming that there is a declining market trend in Thailand’s returnable bottle market, PepsiCo has shifted focus to single-use plastic and aluminum packaging.

The US-based corporation recently announced that it will invest upwards of 18bn baht (US$600mn) in the Thai market over the next three years.

At the core of this investment is the recent completion and opening of a 5.2bn baht ($170mn) bottling factory in Rayong province.

“So far, we’ve ordered 10,000 packages of different plastic bottle sizes. We have sent our sales teams across Phuket, Phang Nga and Krabi in order to keep up with orders from our customers since Super Cheap took over Pepsi’s distribution,” Miss Jiranart said.

Admitting that the volume of Pepsi orders is not yet on par with that before the takeover, she reiterated that the situation will be “as before” as soon as Super Cheap rebuilds and reinforces its Pepsi distribution network in the three Southern provinces.

In a recent PepsiCo press release, General Manager of Beverages for Pepsi-Cola (Thai) Trading Co Ltd, Jagrut Kotecha remarked: “Thailand is a growth engine of PepsiCo’s Asia Pacific business, and we’re committed to investing in the market to drive our future success…”

The firm will also undertake significant marketing investments in Thailand through campaigns related to music and sports.

PepsiCo said it will also place additional emphasis on training to support the company’s expanding workforce in the country. With the completion of the new Rayong plant, PepsiCo’s beverage business now employs 3,000 direct and indirect employees in Thailand.

The firm’s investment in Thailand is part of the company’s overall plan to drive growth in emerging and developing markets around the world, having nearly tripled its business in such markets from US$8bn in annual revenue in 2006 to US$22bn in 2011.

PepsiCo entered Thailand in 1952 and has built a strong and growing food and beverage business in the market.

The firm’s beverage portfolio includes some of Thailand’s most popular brands, including Pepsi, the country’s top-selling cola; Mirinda; 7-UP; Twister; and Gatorade.

PepsiCo’s successful food business in Thailand includes some of the country’s leading snack brands, including Lay’s, Twisties, Tawan and Sunbites.